Maddie Taylor has yet another new release, Sweet Salvation, and she's here today to answer my grueling questions.

Celeste Jones: Maddie, you are incredibly prolific, not just with the number of books you produce but also the length. How do you get so much done?

Maddie Taylor:   Honestly?  I don’t sleep.  I am a chronic insomniac only sleeping about 4 hours a night, on a good night.  About once a month, I will splurge on sleep and clock 6 hours.  I’m such a glutton.

Celeste Jones: You also write in a variety of genres within spanking fiction---historical, western, time travel, Club Decadence. Have I left any out? Do you have a favorite? Is there another type of story you'd like to try?

Maddie Taylor:   I also wrote The Gift which was a paranormal/detective thriller.  I enjoyed that but I don’t think I have a favorite.   I like the challenge of different genres.   If I get bored with one era, for example 2014, I can hope on over to 1872 and play for a while.  I find it rejuvenates me.  I have a file of at least 16 ideas at any given time.  There are two science fictions in there.  I haven’t given that a try.

Celeste Jones: Do you work on more than one book at a time?

Maddie Taylor:   Yes.  I recently had three at about 75% complete.  It happens that way sometimes.  They will all be released within a few weeks of each other I’m sure, which makes it feast or famine sometimes.

Maddie Taylor:   June 1st will be another compilation for Blushing Books.  This time it is a western themed boxed set with five other authors, all set in 1872.  Mine is titled The Juniper Bride.  I love a good western romance.
Unbind My Heart, Club Decadence 4 is in beta now so it will be out soon.  It’s Master Jonas’ story.  He is a Shibari Master… Yummy!
I also have a beach read I am working on with a new author friend of mine.  Probably out by July 1.
I’m also working on a sequel to Marshal’s Law.  This will be Heath’s story.  I figured while I’m in 19th century western mode, I should carry on with that theme.
So, there is an example to the previous question if I work on more than one book at a time.

Celeste Jones: What's the worst job you ever had?

Maddie Taylor:   OMG, how much time do you have?  I am a registered nurse by day, can we talk?  LOL  I remember one shift I had almost every body fluid spewed, spilled or splashed on me: urine, feces, blood, saliva…  I know it sounds like a BDSM club scene but it was at the hospital.
Now I do case management, thank goodness, but I paid my dues.  It is a rewarding career and I met/helped many wonderful people along the way, but it is not for the faint of heart or the weak of body or spirit.  Twelve hours shifts are torture, I’d rather take a good long flogging.  For reals!

Celeste Jones: Which is worse---editing or housework?

Maddie Taylor:   Ha!  Great question.  My beloved husband got me a cleaning service for my last birthday.  Every Monday the busy little bees descend on Castle Taylor for a thorough cleaning so the queen can do the editing which is definitely worse.  If I didn’t have my domestic goddesses every week, it would definitely be housework.  UGH!

Maddie Taylor:   Yes!  It has been a whirlwind first year for me.  Can you believe that with the release of Sweet Salvation, I have eleven individual titles and two boxed sets in publication.  Am I dreaming, Celeste?  If so, don’t pinch me.  I’d rather stay in dreamland, thank you very much.
I have tremendous support from my readers and appreciate all the IM’s, emails and blog posts that they take time to send.  It always gives me a chill when someone takes the time to tell me they liked one of my stories.  Thank you all.

Thank you too, Celeste.  You befriended me early on and have always been helpful with a blog post, a suggestion, or to answer a question.  Many in our author community give back this way and it is greatly appreciated.  Thanks for having me on today.

Aww. Thanks, Maddie. My pleasure.

The Blurb:
Fresh out of college and looking to escape her painful past in Atlanta, Stacy Altman is in Detroit for an interview when a drop dead gorgeous doctor literally runs right into her. Two years later, when the same man—wealthy surgeon Jared Baker—plows through a door and collides with her again, this time injuring her knee in the process, it seems that fate has plans for the unlikely pair. 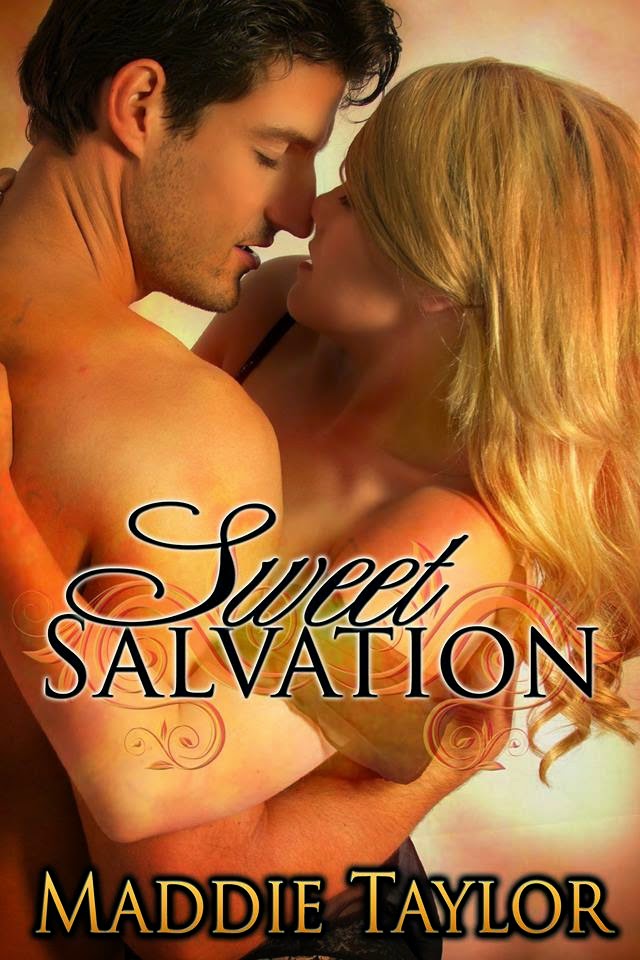 To atone for his carelessness, Dr. Baker decides to personally tend to his newfound “Georgia Peach”. As her doctor, Jared instructs Stacy to rest up until she can walk again… and as the firm, loving man she has long needed in her life, he informs her that she can expect to be taken over his knee for a spanking if she disregards her doctor’s orders.

Stacy soon lands a promotion and her life in Detroit becomes everything she hoped it would be, but even after Jared asks her to be his wife, it becomes more and more difficult for her to hide from the trauma she hoped she had left behind in Georgia. Can Jared’s love prove to be the sweet salvation she so desperately needs?

Excerpt:
She gave him a watery smile and kissed him, a soft touch of her lips. That wouldn’t do for him, she knew. The gleam in his eyes told her as much. This had been hard on him too and he needed a little TLC to ease him. That she could do. Her lips brushed his again, her tongue slipping out to lick along the seam, imitating what he did to her so often. He softly growled his approval and she smiled, lowering her head, offering him more, happy to be able to give him this pleasure. Evidently, her initiation of the kiss was all the go-ahead he needed, because he took over.
He rolled them until her back found the softness of the bed. Never breaking contact, his heated gaze seared into her as he adjusted his clothes and surged inside her. As always, his size made her gasp at first, until she became accustomed to him. She expected hard and fast, but she thought wrong. This time their loving was slow with a burning intensity she hadn’t felt before. His big body wrapped around her, one hand tight in her hair, the other burrowing underneath until his arm encircled her hips. His broad chest above her, their legs entwined. He enveloped her and his message was clear. Not only did he possess her body, but he also surrounded her with the power of his protection, his strength and love a barrier erected to keep her safe in all ways, but especially against the horrors of her past. With him, she could surrender and lower her shields.
He didn’t need to, but he whispered it anyway. “You’re safe with me, baby, always.”
Those words alone could have made her come, but this was Jared. His husky voice and seductive scent, his hard body embracing her as he stroked slowly, his cock surging deep inside, this was all Jared. He overwhelmed her senses, making the ordinary extraordinary and making her orgasm all the more spectacular as they reached their climax together.