We're moving at a faster pace now that we have switched to a new book every week. I hope I can keep up with the schedule (which I set). But, that means we get to talk about more books.

This week, it's Correcting Kathy by Patricia Green. 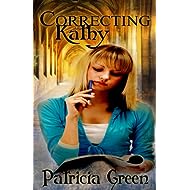 Blurb: Kathy would never have imagined that one of the most embarrassing moments of her life could make her the envy of every girl at her small university, but after a stumble in the cafeteria leaves her blushing and Hal Emory drenched in soup, she is stunned when the incident ends with her meeting the young, handsome professor for dinner.

She is even more taken aback by the fact that he does not hesitate to lecture her over dinner about her smoking—a habit she has tried many times to break without success. When he offers to help her quit by means of “aversion therapy”, she cannot resist the urge to learn more, and almost before she knows it she finds herself bent over the desk of this stern professor for a good, hard spanking.

After a subsequent chastisement leads to lovemaking which is as hard and hot as it is unexpected, both Kathy and Hal must decide if they want to pursue a romance. Can Hal leave the pain of the tragic death of his wife in the past and allow himself to fall in love with Kathy? Even if he does, will she be able to accept not only his love but also his guidance and, from time to time, his firm hand applied to her bare bottom?

There are so many spanking books out there, sometimes it seems difficult to do something that hasn't already been done. One of the things I liked about Kathy was that she always wore some sort of holiday themed panties. It was cute and showed her quirky side, but also her innocence. If she'd been wearing a thong or something lacy, it would have given a different perspective on her, so kudos to Patricia Green for creating a fun quirk that I haven't seen before.

Another thing I liked about this story is that Hal goofed up a couple times and Kathy, though much younger and less experienced, gave him quite the set down. It was fun to see the dynamic move back and forth between them.

You know I love a good professor story. I'm not sure why. So that leads to my first discussion question: What is it about professors that makes them so appealing as heroes? I know it's not just me, so time for the rest of you to 'fess up.

Bonus points: Tell us about the professor/teacher you had a crush on. And don't pretend that never happened to you, because I know it did.

Second discussion question: The first time Kathy gets spanked, she lays across Hal's desk, lifts her skirt and reveals "skimpy white panties sporting the words 'Ho, Ho, Ho' with small, colorful Christmas trees dotting the seat. When Kathy got dressed that morning she certainly had not been anticipating a spanking. Has this sort of thing ever happened to you? Maybe not Christmas panties, but you know, those less than sexy panties you put on when you don't think it will matter?

I thoroughly enjoyed Correcting Kathy and I hope the rest of you did too.

She's also contending with a string of unexplained goldfish deaths and an embarrassing incident involving a neighbor's topiary.

Will Tara find her dream Dom? Get her life together? Publish a book that sells a million copies? Find a Dom who knows how to spank? Solve the mystery of the dying goldfish? Or will she always be ... BOUND FOR DISAPPOINTMENT?