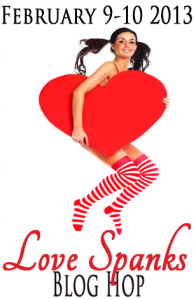 This will be a long post, but it's full of good info.

For updates and the complete list of information, please see the main contest page.

Here is a quick rundown of the rules:

FREE BOOKS!
As an extra treat, all Love Spankers are eligible for free books!  (Donated by Lazy Day Publishing)
To download your free copies, go here.
All the other rules can be found here.


Plus, I'll be giving away a $10 Amazon gift card to one lucky commenter who answers the question at the end of the story. Please leave your email address in your comment.

After that, be sure to visit all the other Love Spanks participants and comment on their blogs to enter individual contests as well as the grand prize drawing.

Whew. And now, here's my part:

I'm so excited to share this story with you. It's a follow up to my book Twenty One Days to a Better Attitude. In the original story, Assistant Prosecuting Attorney Darcy Hughes has her life tightly under control, at least until Ben Dawson moves in next door. Ben’s attempts to be friendly are quickly rebuffed. He calls her out on her rude behavior and suggests that a good spanking will cure her bad attitude.

This story picks up a few weeks later.

Valentine’s Day. Damn. First, she’d forgotten all about it, which was good because that saved her from spending more of her day pissed off, second, it was the most annoying work day of the whole year.

In a job that saw the worst of humanity on a regular basis: drug dealers, child abusers, thieves and murderers, you’d think that Valentine’s Day would be a highlight. Not for Darcy Hughes, Chief Assistant Prosecuting Attorney and all around grouch. 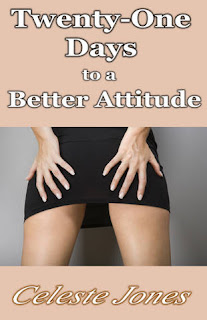 She made a mental note to schedule the day off next year. Maybe she’d make an appointment for a colonoscopy. It would be an improvement.
For her this day would be a marathon of reminders that she'd failed at love. Every office in the building from the board of elections to the dog catcher would have flowers delivered to some lucky lady who would blush and giggle and parade them through the office, or the whole courthouse if she could figure out a way to do to it, to show that she had a Valentine.
Valentines: the universal sign that you were spoken for.
Darcy couldn’t remember the last time she got a Valentine, though she suspected it probably was deposited into a foil covered shoe box on her desk in the third grade. Even the few dismal adult relationships she’d had seemed to always go down in flames before February 14.
Most people would try to bury themselves in their work in order to avoid the constant reminders of romance, but even if Darcy tried that tactic, which she was prone to do, it wouldn’t help. You see, courthouses have courtrooms and courtrooms have judges and judges perform marriage ceremonies.
Much as it annoyed Darcy to watch brides on TV competing with each other for the best wedding, while acting like spoiled self-centered brats, at least they didn’t interfere with getting her work done. Although she applauded the practical aspects of a quickie courthouse ceremony, on Valentine’s Day the volume of giddy brides was nearly puke-inducing.
Darcy needed a judge’s signature on a document she’d spent several days preparing, but in order to get to him, she had to wait behind three couples who wanted to be amongst the first married this Valentine’s Day.
The whole thing made her skin crawl. She was a professional, after all. Her business should come first.
She scowled and took her place in line.
*****

Ben Dawson grabbed his bag from the airport carousel and hurried to his car. His flight had been delayed which put his plan several hours behind schedule. He’d have to make a couple of adjustments, but it could still work.
He smiled to himself as he pulled onto the highway.
He had a feeling that Darcy didn’t like surprises. No, it wasn’t just a feeling. It was a certainty. Darcy was a control freak who liked everything her way and planned out in every detail.  Adaptability was not her strong suit. Bossiness was.
But damn, she turned him on. He loved her feistiness. When she got on a roll of self-righteous indignation, it was all he could do not to bend her over the back of the couch and screw her until she stopped talking and started moaning.
He hadn’t done that…yet. He knew she wanted him to and often she went out of her way to provoke him.

Question: Please share either your best Valentine's Day (without too many lurid details) or your worst. One commenter will be chosen at random to win a $10 Amazon gift card. Please include your email address in your comment.

Be sure to visit all the other participating blogs. You won't want to miss any of the fun.

For updates and the complete list of information, please see the main contest page
at February 08, 2013

Email ThisBlogThis!Share to TwitterShare to FacebookShare to Pinterest
Labels: Love Spanks, Twenty One Days to a Better Attitude