Has it been another week already? Apparently so and now it's time for Saturday Spankings.

This week's snippet is from Underwear Probation. In Underwear Probation Daisy's husband Reece requires her to go to work without underwear so that the feel of her clothes against her bare skin will act as a reminder of the rules she is to follow. In this scene, Reece has stopped by Daisy's office to see how her day is progressing but when she disobeys him, he asserts his authority over her...and her backside. 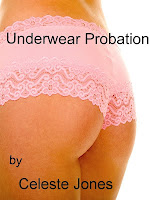 “Well, look at this.” Daisy knew from the tone of Reece’s voice, this was a rhetorical question and she kept her face down. A different, more intense, sting pulsed through her rear end. “Who knew that office supplies could be so much fun?”
In the shiny finish of the desktop Daisy saw Reece’s reflection as he reared back for another swing---a wooden ruler in his hand. She’d be sure to throw that thing away the first chance she got.
She could not believe that he was making such a game out of this when just a few feet away, anyone, including her boss, could come to her door and see this little domestic scene playing out across her desk. She’d never work in this city again.

Please visit the other Saturday Spankers.