Spanking Stories Book Club---Mated To The Vikens by Grace Goodwin

Welcome to a special edition of Spanking Stories Book Club. Today we're discussing Grace Goodwin's Mated to the Vikens (Interstellar Brides Book Eight).  This is a book that has not one hunky hero. Not two sexy leading men...but three, count 'em three, sexy Vikens who are devoted to their human mate. 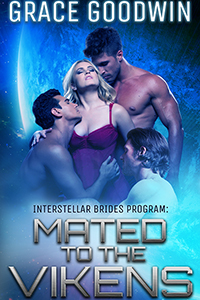 Blurb: As an art dealer in New York, Sophia Antonelli's worked hard to build her business, but fate forces her to make a deal with organized crime. When things go wrong, she takes the fall and is offered a choice: twenty-five years in jail or the Interstellar Bride Program. The choice is easy and Sophia is shocked to learn she's mated to not one, but three Viken warriors.After ten years fighting the Hive, Gunnar, Erik and Rolf are now the Kings' guards at Viken United. Bowing to the new Queen's wishes, they agree to share an Interstellar Bride. It should be an easy task since she's matched to three of them, all battle hardened warriors. But none can save her from being kidnapped during transport. Accidentally mixed up in an evil organization's plot to assassinate the Viken Queen, Sophia refuses to back down, even with her mates standing protectively in the way. After her experience on Earth, she's not about to let anyone ruin her new life. Sophia will risk everything to expose her enemy, but when it comes to their new bride, her three Viken mates will do whatever it takes to eliminate the threat and keep her...forever.


Now, onto the thrilling discussion.

1. Three men and one woman. Could this sort of relationship work in real life? Would you want it to? We have sister wives, can brother husbands work?

3. I love the arranged marriage and mail order bride tropes. What about you? What's so appealing about them?

4. If you were scientifically matched to your ideal mate, would you be willing to marry them, sight unseen?