What an exciting day! I'm finally able to announce a fun boxed set from Cara Bristol, Sue Lyndon, Renee Rose and me that will be available August 18.

Correcting the Co-eds is a collection of four stories all set at colleges in the 1950s.

My book is called Back To Her Future. To keep peace with her roommate, Astrid agrees to try her time travel app, never imagining that this would be the one time Margo invented something that worked.

In an instant, Astrid is transported to 1956 and the dorm room of Richard "Dick" Johnson---Eagle Scout, straight arrow, spanker.
Dick Johnson has never met a girl like Astrid. Just because she says she's an exchange student from Canada doesn't mean she can flaunt the rules of proper ladylike behavior and he intends to help her understand American ways, even if the lessons are taught across his lap.
Astrid is charmed, and turned on, by Richard's old-fashioned ways, but she knows he'll never understand if she tells him the truth.
When the time comes for Astrid to return to 2016, will she be able to go Back To Her Future?
This book contains spanking, hip 50s slang, and some mocking of Canada. If such things offend you, please do not buy this book, eh? 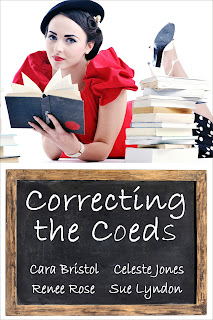 Here's an excerpt. Hope you enjoy it!


Astrid laughed as well. Richard was fun to be with and easy to talk to. For all the strangeness of having been transported sixty years into the past, she felt happy and content strolling down the street with Richard. Her trip to 1956 might be much more interesting than she’d expected. She stole a sideways glance at him and wondered what it might be like to kiss him and she got a warm feeling low in her belly thinking about it.


They arrived at a crosswalk and just before they stepped into the street, a car stopped right in front of them, splashing water on Astrid’s skirt.


In an instant, she transformed from sweet, 1956 Astrid, to street-smart 2016 Astrid.  She slammed her hands on the trunk of the car making a loud thud. “Hey, asshole,” she shouted, “you’re in the crosswalk.”


The driver, an older gentleman in a hat, turned and stared at her, horrified. He looked from Astrid to Richard and back again, then put the car in gear and drove off.


“What a jerk,” Astrid said, turning to Richard, expecting his agreement.


The dark look on his face was her first hint that he was not impressed. “That was quite a show,” he said, his voice low. He grasped her elbow and marched her across the street in the now car-free crosswalk. They entered the campus and he continued to hold her firmly. He steered her to a bench beneath some trees near the library where he sat down and pulled her across his lap.


“What are you doing?” Astrid’s hands touched the ground and she pushed against the earth to raise herself up.


“Hold still,” Richard said, placing a hand between her shoulder blades to keep her in place. His other hand swatted her skirt covered backside several times. Hard. “I don’t know how people act in Canada, but here in the United States we treat people with respect, particularly our elders. And we most certainly don’t go around calling people a-s-s holes.”


Although the swats stung, Astrid had to smile at the way he spelled out ‘bad’ words. “I’m sorry,” she said, remembering the shocked look on the driver’s face. He reminded her of her grandfather, except that in 1956 her grandfather was a young man. She shook her head. Everything was topsy-turvy, including her placement over Richard’s hard lap.


She wiggled a bit closer to his body and detected a bit of arousal inside his pants. She smiled to herself and wiggled closer. The swats continued. The bountiful fabric of her skirt softened most of the blows, but Richard certainly knew what he was doing. “Did you earn a spanking badge in the Boy Scouts?”


“Do you really want to add being a smart aleck to your list of infractions? You’re lucky we aren’t closer to my dorm or I’d go in and get some soap to wash out your dirty mouth. No girl of mine is going to act like that.”


“Girl of yours?” Astrid grabbed hold of the bench with one hand and leveraged herself as best she could to at least look into his face. “What do you think you’re talking about? I am not your girl. I’m not anybody’s girl.”


Richard smiled at her and tapped her on the nose. “Face the ground, Astrid. Your punishment is not over.”


“You can’t just go around spanking people.” She continued to stare at him. “This is ridiculous.”


“I’m not going around spanking people randomly. That would be ridiculous.” He put his hand gently on the back of her head and repeated his instruction that she face the ground. “What kind of man would I be if I let my girl go around insulting people and using potty language?”


Astrid complied and stared at the ground. She caught a glimpse of herself reflected in the high gloss shine of Richard’s shoes. Her eyes were bright and even though she felt certain she was angry, she was actually smiling. How was that possible?


She took a deep breath and gritted her teeth, determined not to smile or say anything. The silent treatment had always worked very effectively for her and she intended to pull out all her best ammunition in this little battle of the wills.


The swats to her backside echoed back from the stone walls of the library. Although she had decided not to talk, Richard had plenty to say. “You know, Astrid, I realize that life here is very different from what you are used to in Canada, and you might think our ways our strange, but it’s very important to me that you learn how to get along here in the United States. I would hate for you to offend someone else. You can’t honestly say that pounding on someone’s car, particularly if that someone is an elderly gentleman, and then calling him vulgar names is considered polite behavior in Canada, can you?”


Astrid was embarrassed by her behavior and the fact that it had spoiled their nice evening made her angry. However, that still did not mean that she agreed that he could just spank her whenever he felt it was necessary and she planned to freeze him out until he got the message.


A hard swat landed in the middle of her butt. “I asked you a question, Astrid.”


Astrid sure had plenty she wanted to say to one Richard Johnson, but she was determined to give him the cold shoulder.


“If you’re giving me the cold shoulder, Astrid, it’s rather silly to do if you aren’t going to tell me why you aren’t talking. For all I know, you’re being quiet because you are enjoying getting your butt swatted and you think that it will spoil your pleasure if you say something.”


“Oh, you are so wrong,” she said, hurriedly clamping her hand over her mouth once she realized she’d spoken. How long had her silent treatment lasted? Thirty seconds? Pitiful.


He chuckled. “I guess I am, because now you’re chattering away like a canary.”


Determined to renew her efforts to ignore him, Astrid kept her hand clamped around her mouth, even though that left her with just her left hand to try to balance herself across Richard’s knee or to attempt, yet again, to free herself from his lap.


“Take your hand away from your mouth and talk to me, Astrid.”


She shook her head no.


“It looks like this punishment isn’t having the desired effect.” Richard stopped spanking her.


She’d won. Astrid took her hand away from her mouth and smiled broadly at her easy victory. What a pushover Richard was.


Using both hands, she pressed against the ground and attempted to return to standing, but her plans were thwarted when Richard pulled her closer and tossed the layers of her skirt up until they piled on her lower back. The same cool breeze that had inspired Richard to drape his jacket over her shoulders blew across her buttocks and her flesh quivered, whether from the temperature or anticipation, Astrid dared not say.


In a flash, Astrid’s skirts were brushed back into place and she found herself standing next to Richard, her head spinning a bit from the sudden shift in position and Richard’s change of plans. She studied his face, wondering what caused him to alter his plans.


Richard gently took her elbow and they walked silently to the front of the library. “It would be only proper for me to walk you to your dormitory, but I know you said your roommate would be jealous so I will leave you here, if that is okay with you.”


“Um, yes,” Astrid licked her lips, anticipating a good night kiss. “That is very thoughtful of you, Richard.” She slipped his jacket off her shoulders and leaned close to hand it to him, certain that the move would inspire him to kiss her.


He took the jacket in his left hand. With his right, the hand that had been spanking her bottom just a moment before, he shook her hand. “Thank you for a very pleasant evening, Astrid,” he said, stiffly before walking away.


A handshake? Astrid stared at her hand and then at Richard’s back as he walked down the sidewalk. A handshake? She’d never felt so completely dissed in her entire life. He had a lot of nerve, spanking her ass and then giving her a handshake like she was his maiden aunt.


Well, she wasn’t going to put up with that. She ran down the sidewalk and grabbed him by the shoulder. “Just what was that about? You spank me and then dump me off at the library with a handshake? I thought you were a nice guy, but you’re just a big jerk like all the others. Like men have been through all phases of time.”


Richard’s face turned beet red. “A-astrid,” he said, obviously straining to maintain eye contact with her, “I hope that before we see each other again you will go shopping for a proper pair of ladies...um...undergarments.” He whispered the last word while staring at the ground. The tops of his ears were crimson.


Oh. My. God. Astrid could not bear the idea of stealing underwear from the girls at the gym that morning. Poor, sweet, innocent Richard had expected to see a modest pair of granny panties when he lifted her skirts and instead he was treated to her bare cheeks exposed by a thong.


Much as she wanted to laugh and laugh hard, she knew that doing so, particularly while he was so utterly embarrassed, would be incredibly rude. Astrid stifled her giggles and replied. “Yes, Richard, I will most certainly do that. I apologize if my foreign Canadian ways offended you.”


She leaned forward and kissed him on the cheek before turning and heading for the library.

To find out more, you'll have to buy the book on August 18!

Now, visit the other hip chicks who took a trip back to the 50s to bring you some groovy spanking stories.