Can a spanking romance be funny and sexy?

An interview with Cara Bristol, author of Domestic Discipline
Q: Tell me about Domestic Discipline, the book. Is it a romance, an anthology?
A: Domestic Discipline contains two short spanking romance novellas. One story, Wife on the Lam, is light and humorous, almost a romantic comedy, but sexy. It’s intended to be a bit tongue-and-cheek. Although the DD relationship aspect is true-to-life, the story itself is a lighthearted romp.  When I wrote it, I just wanted to have fun with the story, to play with it, and tease my characters a little. When you ask women what they want in a mate, a sense of humor usually ranks near the top of the list. So why not have humor in a romance?
Rahm’s Way is more intense.  Domestic Discipline offers two different types of spanking romances, but the unifying factor is domestic discipline, and the couples’ attempts to make it work for their respective relationships.
Q: How does your story start where it does?
A: The story opens with heroine Janelle on an airplane headed for a romantic vacation getaway—all by herself. Believing her husband forgot their anniversary, she gets pissed and flies off without him. She doesn’t even tell him she’s going. She leaves a note and casserole. That’s how mad she is.
Q: Is there anything special about the setting?
A: Wife on the Lam is set on a fictitious Caribbean island, called “Isla Island,” and it’s a composite of many places I’ve visited. I drew Janelle’s experiences on the island from my own—I’ve gone on the horseback ride from hell, dealt with the humidity and bugs. I’ve been boating and snorkeling.
Q: What creates conflict between your romance couple ?
A: That Janelle thinks Brent forgot their anniversary and in a fit of pique, she runs away.
Q: Does a character in your story have a secret?
A: Big time. Brent has two secrets. The first is that he didn’t forget their anniversary. He secretly booked the vacation Janelle wanted, intending to surprise her. When she flew the coop, she ruined his big surprise. His other even bigger secret is that he follows her to Isla Island. She has no idea he’s spying on her. He’s giving her just enough rope to hang herself.
Q: Why did you title the book Domestic Discipline?
A: As I said, the book contains two different erotic romances. Wife on the Lam is kind of a romantic comedy, and Rahm’s Way borders on BDSM. Wife on the Lam has a cowboy in it. Rahm’s Way features a military man. It was hard to find a title that captured the lightness of one story and the darkness of the other. So, I thought, why not just call it what it is? Domestic Discipline. Each couple is trying to find happiness within the contest of domestic discipline marriage.
An excerpt from Wife on the Lam, Domestic Discipline 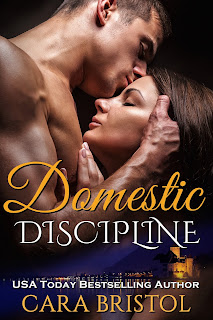 (I said the story is funny, but this is one of the more serious scenes in Wife on the Lam)
Sitting on the bed in his underwear, Brent could hear Janelle singing in the shower. Then the water shut off, the hair dryer ran for a while, and then she pranced out wearing the scandalous suit and a seductive smile.
He twirled his hand. “Let’s see the back.”
She spun around. The thong disappeared in her crack, completely baring her apple-red ass cheeks. She faced him again. “You don’t think it’s too skimpy?”
“Not for what I have in mind,” he said.
The curve of her lips widened.
“Let me clean up.” He headed into the bath before her come-hither look could work on him.
When he emerged from the shower, he found Janelle readying for an afternoon swim. She had towels rolled and had gathered up her e-reader and his, sunblock, the camera, and a couple bottles of water. Her poor ass glowed red. “Do you prefer the beach or the pool?” She faced him.
“Neither. At least not right now.” He hitched his towel more firmly around his waist and padded to the bed. He sat on the mattress, and patted his knee. “Over here, sweetheart.”
She widened her eyes before her face crumpled with dismay. “B-But, I thought…I figured when we got home…” she trailed off.
He shook his head. He’d always meted out discipline as soon as possible, believing in the importance of prompt punishment. “We need to put this matter behind us. You won’t enjoy yourself if you spend the entire vacation worrying about being spanked.”
“Then don’t spank me.” Her eyes held a plea. “I learned my lesson.”
“As uncomfortable as the horseback ride may have been, having a bad time doesn’t count as discipline. You ignored my feelings by taking off without any explanation. We’re partners, Janelle. I don’t check out of our marriage when I don’t get what I want.”
Her lower lip quivered, and she hung her head. “I’m really sorry.”
“I know you are.” He patted his lap again. “Let’s get this over with.”
Domestic Discipline Blurb:
Love, desire, domination, and submission. Two domestic discipline romances by USA Today bestselling author Cara Bristol in one volume.
Wife on the Lam
Janelle wants to take a luxury vacation for her wedding anniversary. Despite numerous hints, husband Brent misses all the clues and plans a business trip! Miffed, she flies off alone to a luxury resort. She’s going to celebrate—with or without him.
Brent didn’t have to work. He’d planned a second honeymoon to the luxury Cabana Resort. Janelle might have ruined his surprise, but he’s not going to let her ruin their anniversary, too. He has a little trick up his sleeve to take his errant wife in hand and get their marriage back on track.
Rahm’s Way
Before her military husband left for his tour of duty, Cadence Simmons relied on Rahm’s love, direction, and protection. His absence forced her to become more independent and make decisions for herself. After serving his country, he’s home for good and eager to resume their marriage as it was before. Only Cadence isn’t quite sure she wants things exactly as they were. Can domestic discipline guide this couple through some major changes?
Buy Links: