Check out this hot new release by Juliette Banks. For just one week, starting today, it will be on sale for 99 cents...where else can you get so much deliciousness for less than a dollar?
About Out of the Darkness:
"A man could go to war in defence of a body like yours, you know. You hold most men in the palm of your hand.” 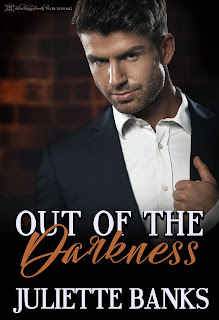 The missing father; the predatory stepfather; the abusive lover; they all let her down.
She is one of the most beautiful and photographed women in the world.
She lives the life many young girls dream about.
But sometimes the dream and the reality don’t match up.
William, a powerful and charismatic Dom, who excites her like no other man before, steps into her life.
Will he be different from the others?
Will he recognize her need for loving submission?

"I can't keep traipsing three miles every time I want to spank that delectable little behind of yours."
NOTE: This book was previously published, under the same title but with a different cover, under the author name of Rachel de Vine.

I'm not sure that even I know the real me. My life had changed so often since I'd been 'discovered' at the tender age of fifteen, while walking down the King's Road in Chelsea, and within two years I was pictured on the covers of all the glossy magazines. It all happened so quickly. One day I was a fairly ordinary London schoolgirl, and the next I was travelling the world and being wined and dined by the world's glitterati. Then there were the men. Mostly, they were older, successful and wealthy men who bought me champagne and dinner and then thought they owned me. Some of them were very powerful, men you would not want to cross for fear of the consequences. A few were kind, but many were not. I sometimes wondered if the fault lay with me. Did I do or say things to attract the wrong type of man? Did I give off the wrong vibes, or was I simply unlucky? I had no idea.
The working life of most models is quite short; youth and beauty being such transient states. Make the most of it, was the advice I often received, especially by older models who knew that there were always younger and prettier women to take their place. Many of the girls, if they didn't make it right to the top where the serious money was made, adopted the other route of marrying wealthy men. It wasn’t always a guaranteed success. I knew of several older models who had given up the catwalk and married such men, some of whom turned out to be serial philanderers. They became second or third wives, and probably realised with a sinking heart that they were destined eventually to be replaced, as their predecessors had been.
I had a few love affairs, but I had never fallen in love. I saw most for what they were, men who viewed a beautiful woman as another symbol of their success, like expensive sports cars, yachts, and luxury villas. I tried to stay away from that sort of man, but I wasn't always clever enough to spot the ones who should be avoided at all costs. They didn't all look like Russian gangsters.
"Oh I work hard, but I play hard, too. Do you play hard, Marianne?

Get your copy! For one week only, the book is on sale for only 99 cents!