Divorced, alone, and jabbing a candle into a frozen cupcake was not Mimi's idea of a perfect 40th birthday. Heck, it wasn't her idea of ANY birthday. She hated her body, hated her life, and most especially hated her non-existent sex life. And she was absolutely certain that she’d never fulfill her secret desire to be spanked.

Until she closed her eyes, blew out the candle, and made a wish...

Soft music began to play. Was it real or imagined? Can you have a fantasy within a hallucination? 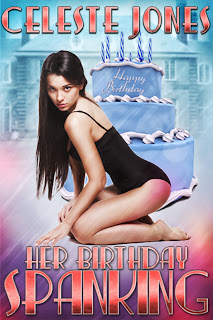 “Would you care to dance?” Paolo’s fingers brushed hers and he moved her into position.  A charge of electricity shot through her fingers and to all points of her body.  Could he feel her quiver? He was so sophisticated and she was so…Mimi.
He felt real. Maybe she wasn’t in a coma. But if she wasn’t hallucinating, what was going on? Had someone paid him to do this? Was she on a game show? Would a camera crew jump out from behind the potted plants and wave a microphone in her face as soon as she began to swoon in this man’s arms?
If she’d wanted to resist, and she didn’t, it would have been impossible. Before she was able to open her mouth or even think of a coherent protest, Paolo pulled her into his arms and once she felt his warm hand at the small of her back, guiding her around the tiled floor of the patio, all thoughts of protest left her mind.
Although she didn’t resist his efforts to dance with her, her feet were none too cooperative. After the third time she stepped on his foot, Paolo stopped dancing, turned her around and gave her five firm swats on the ass before returning to their dancing position. “I am perfectly capable of leading this dance, Mimi, if only you will let me.”
It took three passes in front of the pool before Mimi’s mouth stopped hanging open. Had he just spanked her? His hand at the small of her back dipped low and gave a squeeze. The sting reassured her that Paolo had, in fact, spanked her.
It also confirmed that he knew all about her birthday wish.
She looked at his face, expecting to see derision. Instead, he winked.
“Isn’t that better?” The rasp of his voice in her ear sent shivers down her spine.
She’d been so focused on the fact that he’d spanked her that she forgot to be nervous about dancing. It was better when she let him lead. Go figure.
“Better than Dancing with the Stars, isn’t it?” Paolo’s warm breath fluttered against her cheek.
Mimi pulled herself out of a daze and looked at him. “How did you know?”
“I know all your wishes. Your dreams.” A slow smile moved across his mouth and made a warm pit form low in her belly. “Your fantasies.” 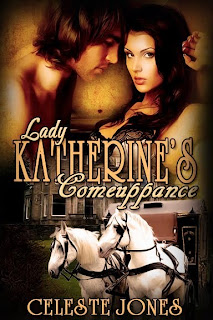 The house of Winchester is set on its ear when Thomas, a distant cousin of the recently deceased Earl, arrives to assume his role as Lord Winchester. In addition to an elegant London home and a luxurious country estate, Thomas “inherits” Lady Katherine, the widow of the former earl. Lady Katherine, herself the daughter of an earl, is horrified that a barbaric American will be not only the new lord of the manor, but also responsible for her future support and livelihood. Lady Katherine is determined to maintain her position in society and equally determined to ignore the brash American. That is, until their passions override their good judgment. When a scandal erupts and forces them to marry, Thomas uses both tenderness and discipline to prepare his wife to face society and regain her good name. Will this fine English Lady surrender to the American? *This book contains hot sex and disciplinary spankings.*

Daisy learns that getting through the day without underwear isn't nearly as hard as learning to trust.

"Maybe we need to up the ante a little bit so that your attention doesn't wander."
Alarm thundered through Daisy. "Up the ante?"
"Ah, my pet," Reece slanted his eyes at his wife. "Tomorrow you will be on underwear
probation."
"What?"
"No underwear."
"No, Reece, please."

"You said yourself that if you'd been paying attention, you would have behaved better. I want the feel of your clothes on your bare ass to remind you all day long that I expect you to live up to my expectations of you and to behave like a lady."
Daisy grabbed the edge of the dresser and bent herself over. "Just go ahead and spank me now. You can even use a spatula or wooden spoon. Just get it over with."

The sly smile that crossed Reece's face made Daisy's stomach do strange things. "Oh no," he said. "I'm starting to like this idea."

Twenty-One Days to a Better Attitude

Assistant Prosecuting Attorney Darcy Hughes has her life tightly under control, at least until Ben Dawson moves in next door. Ben’s attempts to be friendly are quickly rebuffed. He calls her out on her rude behavior and suggests that a good spanking will cure her bad attitude.

“I’ll give you a spanking.” Darcy opened her mouth to protest. He put a finger to her lips to shush her. “When it’s over, if you still believe that you didn’t need one, then I’ll go back over to my house and I’ll never bother you again.”

“But,” he continued to keep his finger on her lips, “if you find that you did need the spanking then I’m going to come back over here every Saturday night and redden your backside.”

Note: Although there is sexual content, this book does not include sexual intercourse. This book includes sexual content and consensual spanking between an adult man and woman. If such activities offend you, do not buy this book. For Adults Only.


The Long Arm of the Law

Variety is the spice of life, so why not spice things up with this collection of fourteen stories by Celeste. Feeling the need for a trip to the beach? Then check out "The Summer Place". Did you have a crush on a professor in college? Then turn to "The Education of Professor Warner." Ever wonder what happens behind the closed doors of a judge's chambers? Then don't miss "The Long Arm of the Law." Is getting older getting you down? "Mirror, Mirror on the Wall" will lift your spirits. In the mood for something fun and fanciful? Read "The Assignment." Ever want to do a strip tease? "Puss in Boots" might give you some pointers. The settings may vary and the circumstances might all be different, but one thing remains the same--somebody's gonna get a spanking.