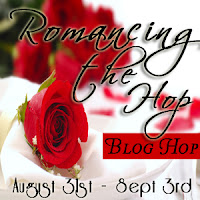 I'm very excited to participate in Romancing the Hop . The hop includes a wide range of writers and bloggers and lasts from August 31 to Sept 3, so you'll have plenty of time to visit all the different blogs.

Each blog will have a post about romance.
And...there will be prizes. Lots of prizes. Every time you leave a comment on one of the participating blogs (and include your email address in the body of the comment too) you'll be entered to win one of these three great prizes.  You can enter as many times as there are blogs to visit. 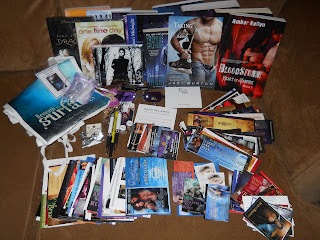 In addition, many of the blogs, including this one, will be giving away prizes too. I'll be selecting one commenter to receive a $10 Amazon or B&N gift card. Please include your email address in the comment. So, if you've been paying attention, that means that each comment you leave on this blog post will enter you in the grand prize drawing and also in my own drawing.

It's going to be an exciting, and romantic, weekend!

Whew. Now that we've gotten all of that out of the way, let's talk about romance.

When I was a child, my mother had a friend named Mabel who was a widow. When I was about ten, Mabel met a man and fell in love. The two of them, both in their early seventies, came to visit. They cuddled up on the couch like a couple of  lovebirds and looked so happy. When it was nearly time to leave, Mabel's fiance went out in the snow to start the car so his true love would be warm and cozy.

I had never seen anything so romantic or chivalrous and I vowed that I when I met a man who did that, I'd marry him.

Fast forward several decades. I had met someone new and on our first date he took me to a New Year's Party. When it got late, we agreed to leave in about fifteen minutes. A couple minutes later I saw him digging through his coat pockets. I thought "I didn't say we needed to leave right away. What's he doing?"

He pulled the car keys from his coat pocket and head for the door. A jolt went throught me and I remembered the senior citizen lovebirds sitting on my parents' couch...and I remembered my promise to myself...Of course I kept that promise and we were married a few months later. And someday we'll be senior citizen lovebirds sitting on the couch too.

Why is this gesture so romantic? I think it's because women like to feel cared for and cherished...even if the way their man shows it is to warm their backside instead of their carseat.

Here's an excerpt from my new release, Underwear Probation, which I think shows the care a man should take of the woman he loves:


In the shiny finish of the desktop Daisy saw Reece’s reflection as he reared back for another swing---a wooden ruler in his hand. She’d be sure to throw that thing away the first chance she got.


She could not believe that he was making such a game out of this when just a few feet away, anyone, including her boss, could come to her door and see this little domestic scene playing out across her desk. She’d never work in this city again.


She stiffened her resolve knowing that the quickest way to end a spanking was to keep quiet and hold still.


Daisy’s fingers clung to the edge of the desk for support and Reece continued to redden her bottom. The flat wood of the ruler made concentrated stripes of heat across her butt. He moved rhythmically up and down one cheek and then the other. Daisy wriggled her toes in her shoes and bit her lip, but she didn’t cry out.


A couple more smacks to the tops of her thighs and he was finished. He covered her stinging backside with her skirt.


Silence filled the office but Daisy kept her face pressed to the desk.


Daisy quickly stood and through sheer force of will, looked at Reece instead of the door.


“Come stand here.” Reece beckoned her with his outstretched hand. Knowing the penalty for disobedience, she complied.
Reece positioned her in front of himself and pointed to the framed photograph on the wall perpendicular to the office door. Realization caused her jaw to drop. From this position, Reece could monitor traffic outside her office door as it was reflected in the glass of the photo. “You deserved to be punished for not trusting me and you should know that I would never want to cause you public embarrassment, especially not at work. I respect you too much.”

His words rasped in her ear and Daisy was sure she could hear disappointment in his voice.


He turned Daisy to face him but her eyes were downcast. “I’m sorry. I should have known you wouldn’t do anything like that.”


“How could you not trust me, Daisy? Haven’t I always done my best to protect you?”


Even though it had been a short spanking, Daisy’s butt burned. However, the pain disappeared and was replaced with shame over hurting her husband. Reece valued trust above all else in their relationship and she had fallen short.


Unsure of what to say, Daisy raised her eyes and looked to Reece for guidance. Disappointment washed over her and a tear trickled down her cheek.


Reece gathered her in his arms. “I know you’re sorry.” His hands stroked her hair. “But we’re in this together. You need to remember that we’re a team.” Daisy nodded her head and snuffled into her husband’s neck.

Underwear Probation, as well as my other books, is avaiable on Amazon and Barnes & Noble.

Thanks for stopping by. Don't forget to leave a comment with your email address in it to be entered in the drawings.

Check out the other participating blogs.
at August 31, 2012