Welcome back! It's our second meeting and I'm excited. Now that we are on the second week, I'd like to talk in more detail about the book, Body Politics by Cara Bristol.

Although this book is clearly about Mark spanking Stephanie, there are two scenes where Stephanie actually spanks Mark and both of them are very different. 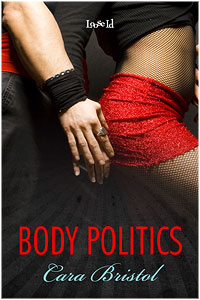 In the first Stephanie spanks Mark scene, the two of them are discussing spanking and the trust it can create in a relationship. When Stephanie asks why the same trust can't be established with a woman spanking a man, Mark says "If I allowed you to spank me, would you trust me enough to lie over my knee?" Stephanie doesn't really believe that he'd allow that, so imagine her surprise when Mark drops his pants, gives Stephanie a few pointers so as to not damage the family jewels, hands her a paddle and bends over the bed.

This scene took me a little by surprise. How about the rest of you? What did you think of the idea of Stephanie spanking Mark?

What about Stephanie's reaction to spanking him?


The second scene where Stephanie spanks Mark is very different from the first one. After dating for a couple weeks, Stephanie realizes that she wants/needs a spanking but she can't bring herself to ask for it. Instead, she teases him and gives him a few swats on the butt with a wooden spoon. I'll save the other details, but it's a delicious kitchen scene that will make you want to go back for seconds.

Was Stephanie playing with fire, or what? Did you admire her daring or cover your eyes thinking "uh, oh...she's in trouble"?

Next week will be the last time we talk about Body Politics (officially). Any other thoughts on the book?
at January 18, 2013