Some days I feel really old, but I'm still not old enough to have lived during the Regency Era (1811-1820) so when I need to find out how people lived during that time, I have a to do some research. One of my favorite resources is Georgette Heyer's Regency World by Jennifer Kloester.

In honor of the release of Willful Miss Winchester on April 16, I thought we could all get ready by learning some Regency Era cant (slang terms). Please feel free to work these phrases into your vocabulary whenever appropriate.

All these terms and definitions are from the book referenced above. If you're interested in learning more about the Regency Era (and not just fancy phrases to impress your friends) I highly recommend it. My comments are in italics.

Hunt the squirrel: the often dangerous sport of following closely behind a carriage and then passing it so closely as to brush the wheel. Considered an amusing pastime by stage coachmen and some sporting gentlemen, the practice often resulted in the victim's carriage being overturned. [And I thought road rage was a new phenomenon.]

Shoot the cat: Vomit [Perhaps this was the precursor to Ralph and Earl]

Dicked in the Knob: silly, crazy [I suppose this is similar to f-ed in the head]

Not a feather to fly with: no money, dead broke [We might say, not a pot...or window to throw it out of]

A tabby: An old maid [cats were not well thought of, it seems]

Miss Charlotte Winchester did not use many slang terms, but there was one particular bit of profanity that seemed to get her into trouble. More than once.

Damn him. How did he manage to raise her ire every time?

She stomped up the stairs to her room and slammed the door behind her. Unfortunately, she did not lock it because Lord Lucas Tanner entered nearly as soon as she did. And he did lock the door.

“You and I,” he said, dark eyes flashing, “are going to get a few things straight.”

“There is nothing for us to discuss. I am going to live here. What you do is entirely your choice.” She spoke with more courage than she felt.

“Yes, it is my choice. And right now, Miss Winchester,” he took her by the arm and marched her to a straight backed chair, “my choice is to inflict upon your rear end some of the same anguish that you have put me through this evening.”

In an instant she was across his lap and staring at the floor. Without preamble, he bared her backside and swatted in earnest. “This,” he landed a blow at the center of her naked cheeks, followed by two more in quick succession, “is for the three boarding houses I visited looking for you.”

“I’m sorry,” she gasped between swats. “I did not intend for you to follow me. I was trying to get away from you.”

“Well, you will not be getting away from me again.” He pulled her tight against his hip. “Your brother has entrusted you to my care, and I will not disappoint him.” Sharp slaps peppered her thighs and she kicked her legs.

“Maybe the reason I ran away was because you spanked me. How is spanking me again going to keep me from running off a second time?”

“If I have to tie you to my side, I will. I am a man of honor and I will not allow you to prevent me from doing my duty.”

“You would not dare!”

“Oh yes I would and I do. I told you last night that I would spank you if you did not learn how to behave, and the first chance you got, you ran off. Would you call that behaving?”

“I would call that asserting my rights.”

“Well, I am going to assert my rights against your bare arse.” The burn in her backside amped up a few more degrees as he continued to spank. Lord Tanner was unrelenting. His palm landed rhythmically from cheek to cheek in an alternating pattern.

“That hurts.” She glared at him over her shoulder.

“That is my intention. I expect that tomorrow your bum will sting and every time you sit down you will be reminded of what happens when you do not behave. Just in case you have any more ideas about running off.”

“I told you I am not running off. You will leave this house before I do.”

“You are very confident for a girl with a bright red ass.”

Frustrated, angry and just plain mad, Charlotte searched her mind for the worst thing she could say.

“Bugger off,” she shouted.

His hand stopped mid-air. “What did you just say?” His voice was a deathly whisper.

Uh oh. Dread knotted in her stomach. What had she done? She was not exactly sure what the phrase meant, but she had heard a few members of the crew say it to each other, mostly when they did not think any of the passengers were around. All she knew was that it felt good coming off her tongue, though she knew better than to say as much to him. Or did she?

Lord Tanner flipped her over and had her standing so quickly, her head spun. He marched her to a corner of the room and shoved her to stand with her nose against the wall. “Do not move,” he said, though his intention was pretty obvious.

It occurred to Charlotte that perhaps she had finally pushed Lord Tanner too far.

A rough hand on her shoulder turned her away from the corner. “Open your mouth.”

Shocked by the unusual command, she complied without thinking. A rough bar of soap was inserted between her lips and she was turned back around to face the corner. “Perhaps this will teach you not to talk like a sailor.”

Straining to calm her pulse and breathe through her nose, Charlotte focused on the wall in front of her. When she had first entered the room, she thought the wallpaper was beautiful. After this, she would not be able to look at it without remembering the horrid taste of soap in her mouth.

“When you stand in the corner, your bare bottom will be displayed for me and anyone else who might enter the room.” Lord Tanner yanked the hem of her skirts up and tucked it into the neckline of her dress, leaving her backside bared.

Instinctively she reached back to cover her nudity. “Hands on your head,” Lord Tanner said, adding a slap to the center of her ass. He slid his hand between her thighs. “Open your legs.”

Charlotte clenched her thighs tightly together, refusing to comply, though she did put her hands on her head.

Lord Tanner gripped both her bottom cheeks in his hands and separated the globes. When his intention became clear, Charlotte flushed with shame. Could he see her bottom hole? He pressed his thumb against her puckered opening. “Open your legs, Miss Winchester.”

He stood so close behind her, his breath sent a shiver down her spine. She chose the lesser of two humiliating options and opened her legs.

“Good girl,” he whispered and Charlotte hated herself for the thrill his words created in her.

With just the briefest touch, he fingered the private place at the apex of her thighs and Charlotte bit down on the soap to keep from crying out. Just as quickly, he removed his hand and she heard his footsteps move to the center of the room. She focused on the wallpaper pattern and did her very best not to succumb to her misery.

Despite her determination, a slow tear trickled down her cheek. She suffered the trip across the ocean in order to see her brother. Instead, she was trapped in a house with a barbarian who punished her and washed her mouth out with soap.

And touched her in naughty places that made her tingle. More tears flowed down her face.

She was supposed to be attending balls and the theater with her loving brother, not stand in the corner like a bad girl. This was not what she had planned, that was for sure. How had it all gone so wrong?

Well, maybe it was wrong to curse at Lord Tanner. She could see that now. She considered apologizing, but how could she talk around the vile bar of soap in her mouth? Foam from the soap dripped onto her tongue and she feared she might gag. Fatigue and sorrow washed over her. Her shoulders slumped and tears streamed down her face.

A shuddering sob racked her body and she struggled to breath around the soap. This was hardly the enchanted London social life she had envisioned. 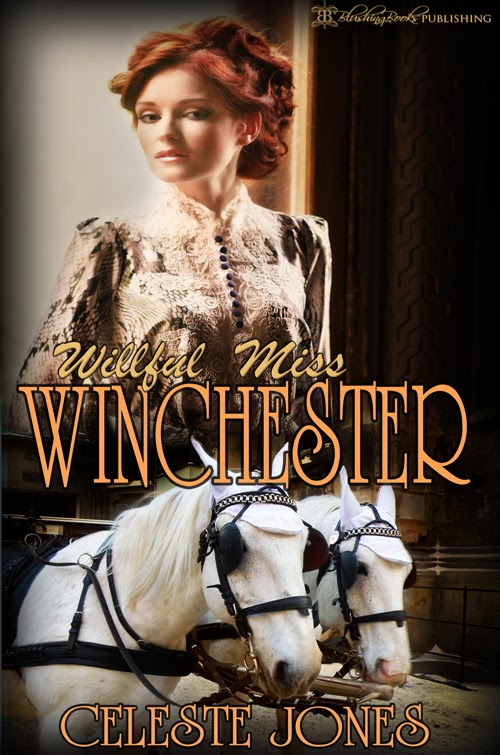 A gentle hand on her shoulder startled her and she was turned to face Lord Tanner. He removed the bar of soap carefully and cleaned her lips with a damp cloth. He pulled her against his hard body and held her as she sobbed. “Shhhh. It is over now.”

What happens next? You'll have to wait until April 16 to find out!

Blurb:Rash, brash and low on cash, Miss Charlotte Winchester sails across the Atlantic ready to partake of all London had to offer the favorite sister of Lord Thomas Winchester.
What a shock for our impulsive adventurer when she arrives at her brother's London townhouse to find he and his wife sailed for America weeks before.
Reclusive widower Lord Lucas Tanner wanted nothing more than to live in obscurity while continuing to mourn the loss of his wife and infant son. When his house burns to the ground, he accepts the invitation of his friend, Lord Thomas Winchester, to reside at his home while Thomas and Lady Katherine visit America. All goes well for him until Charlotte shows up.
Cultures and passions clash when these two unlikely roommates are forced to share a home. Will they draw a chalk line through the center of the parlor, or will their acrimony turn to matrimony?
at April 05, 2015