A readers’ guide: what WAS the author thinking?!
By Cara Bristol
Spanking romance is, above all, fiction. It’s meant to be read for entertainment, escapism, and fantasy. That said, I strive to create characters who seem real. I want to create scenarios that push the envelope, but don’t exceed what is possible, what is believable.
As an author, I wonder, will readers see my book the way I see it? Will they notice the things I want them to notice? Was I too subtle? Will the book meet their expectations?
Readers can’t know what an author was thinking when he/she wrote the book. They can only judge the work itself.
In the past, Spanking Stories Book Club has asked questions for readers to ponder after a book has read—and those questions were formulated by another reader, not the author. With the release of Irresistible Attractions, I thought I would offer a little spin on book club by presenting some issues to be considered while the book is read and to hint as to what I was thinking as I wrote it.
Hannah considers herself to be a person who follows the rules. Do you think she really is? Why or why not? What about Jordan? Does he take liberties with the letter of the law? Do you consider yourself to be rule follower or a rule breaker?
Hannah is sensitive to the judgment of other people and fears they look down on her because she works for a cleaning service. But do you think she’s guilty of reverse snobbery? How so?
Jordan considers himself to be a Dom, but also a gentleman. It’s fairly obvious how he expresses his dominant side, but in what ways do you notice his chivalrous, protective side?
Jordan spanks Hannah for making a rude comment to his sister-in-law, yet when the full extent of her rudeness is revealed, he gives her a slide. Do you agree or disagree with his reasoning?
Blurb:
College student Hannah Laurie works nights for a cleaning service. Among its clients is the Rod and Cane Society, an organization of domestic discipline practitioners. As she cleans the mansion headquarters, she becomes fascinated by the idea of being spanked. One evening, she surrenders to the impulse to try out the equipment in the secret disciplinary chamber.
Millionaire cybersecurity magnate Jordan Bevy, Rod and Cane’s disciplinary proctor, ensures the rules of the organization are followed to a T. Using the disciplinary chamber for personal pleasure is strictly forbidden. But when he catches the shy little cleaner girl trying out the equipment, what’s a fellow to do but bend the rules and give her a hand?
Everything seems like fun and games, until their relationship deepens and their respective worlds collide and clash. Can a lowly cleaner girl ever find acceptance in her boyfriend’s monied world?
IRRESISTIBLE ATTRACTIONS, Excerpt
Through the gap, a flash of movement caught his attention, and he yanked back the curtains.
“Holy shit!” Crouched on a spanking bench, Hannah pulled up her skirt and mooned him through the two-way. What a gorgeous ass she had. So very spankable, she proceeded to do just that—she slapped herself. Through the audio system, he could hear the smack. After several light spanks, she scurried to the implement wall, grabbed a cane of all things, and reseated herself.
He felt like the worst sort of Peeping Tom, mesmerized by the little cleaner girl’s delectable derriere and guilty expression of pleasure. Her strikes were too tentative to cause any damage or leave marks, but her sassy giggle shot straight to his cock as if she’d licked him. “You’re such a naughty girl,” she scolded herself.
Good intentions crashed. He depressed the button on the intercom. “Yes, you are a naughty girl,” he said into the mic.
Hannah screamed. The cane flew out of her hand, and she vaulted off the apparatus with an Olympic dismount worthy of the gold if he ever saw one. He released the button and roared with laughter.
Still chuckling, he drew the drapes, locked the room, and went to confront her.
She’s too young.
All the more reason to teach the curious little miss a lesson. Maybe he rationalized his actions, but she didn’t seem quite as young as she had an hour ago.
Hannah stood across the room, hands clasped to her chest, her face pinker than her curvy bottom was going to be. Doing his best not to laugh, he affected a frown. “Is this what you do when you’re supposed to be working?”
“I’m sorry. So sorry.” She twisted her hands. “I-I’ve never…t-this was the first t-time. I’ll never do it again, I p-promise.” 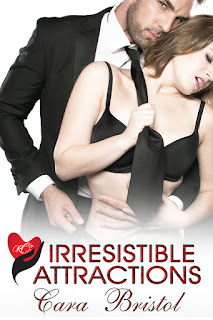 Jordan picked up the cane she’d dropped. On the more severe side of the implement family, the cane wasn’t for newbies. He replaced it on the wall. “Have you ever been spanked? I mean, other than the one you gave yourself?”
Pink deepened to crimson, and she shook her head.
“I’m sorry. I didn’t hear you,” he said.
“No.”
“Excuse me?”
“No, sir.” She focused on his shirt button.
“That’s better.” The response he’d sought shot straight to his groin. “Did you like spanking yourself?”
“I don’t know,” she mumbled.
“It’s considered polite to look at someone when he addresses you.”
Her lovely brown eyes swam with tears, and he almost relented. She had been goofing off on the job, the equivalent of skateboarding down the hallway, but he had no wish to cause her true distress or for her to develop a negative association with spanking.
Jordan approached her, stopped a few feet short of touching her. “I ask again. Did you enjoy it? Tell the truth.”
She sucked her bottom lip into her mouth.
“Hannah?” Her name came out on a growl.
A slight nod. “Yes, sir.”
“What should happen to someone who plays when she should be working?” he asked.
“I guess you should r-report me t-to Tidy Titans.”
“Is that what you want?”
“No, sir.”
“Perhaps we can agree on an alternative.”
“Like what?”
He shifted his gaze to the wall of implements.
“A spanking?” she squeaked.
Author Bio
Cara Bristol continues to evolve, adding new subgenres of erotic romance to her repertoire. She has written spanking romance, contemporary romance, paranormal, and science fiction romance. No matter what the genre, one thing remains constant: her emphasis on character-driven seriously hot erotic stories with sizzling chemistry between the hero and heroine. Cara has lived many places in the United States, but currently lives in Missouri with her husband. She has two grown stepkids. When she’s not writing, she enjoys reading and traveling.
Cara Bristol web site/blog
New Release Newsletter
Amazon Author page
Facebook
Twitter
Buy Irresistible Attractions
Amazon
Amazon UK
All Romance
Kobo