Please welcome writer Liz Borino who is here to talk about her career writing M/M Spanking Fiction and her new release.

Celeste Jones:Welcome! I'm sure my readers are looking forward to hearin gaobut your experiences writing M/M spanking fiction  You have several M/M books out. What attracted you to writing M/M?
Liz Borino: A couple of things. First of all, odd as it sounds, I relate better to men than women, so it’s easier for me to get in their heads. No lie, in my first series I have an M/F couple and the woman feels… written to me. By that I mean, reading back, Carley strikes me as less real than the men in the books. Even more than that though, it’s what comes most naturally to me. Oh, and I think it’s hot.
Celeste Jones: How would you categorize your books? Are they domestic discipline? Spanking romance? BDSM? Something else?
Liz Borino: I categorize them as erotic romance with light BDSM. Zack and Steve have a D/s relationship with domestic discipline. They use spanking for punishments and eroticism. In other words, all of the above!
Celeste Jones: What are some of the challenges of writing M/M?
Liz Borino: As much as it’s easier for me to get inside of a man’s head, I’ve never been inside their body. So, there are technical questions I need to know the answers to, example: “If you’re lying on your stomach and you get an erection, is it more comfortable to tuck it up or down?” The answer is up, in case you wondered. Things like that are similar to any research question. I’m used to it. M/M readers, in my experience, tend to be a little more critical. However, that gives me motivation to improve.
Celeste Jones: I'd never actually considered the tuck up or down question, but it's always nice to learn new things.
Is Liz Borino a penname? If so, how did you choose it?
Liz Borino: Liz is the shortened version of Elizabeth. It’s what I’ve always gone by. Besides, Elizabeth doesn’t quite work for an erotic romance author. Borino is just my father’s last name.
Celeste Jones: Who in your life knows about your writing career? What reactions have they had?
Liz Borino: Everyone knows about my writing career and the responses have been varied. Most of my family hasn’t read my books. I have one aunt who’s open to it. Otherwise, I come from a very conservative family, and they just aren’t comfortable with the eroticism. It took me a while to realize it wasn’t me, it was my writing.
Celeste Jones: You’ve written several books about Steve and Zack. What are some of the challenges of a series and what are some of the pleasures of re-visiting characters?
Liz Borino: I love my boys. Steve and Zack have an interesting and dynamic relationship and I really enjoy seeing where it goes. The challenge is to make the plots different enough from each other that people don’t feel like they’re reading the same books over and over. At the same time, the plots have to make sense for the series.
Celeste Jones: Mine  The Series takes place in Hollywood. What made you choose that setting?
Liz Borino: I wanted to explore how the media would affect the relationship of two private individuals, who just happen to be an actor and a director.
Celeste Jones: Please tell us a bit about your new release.
Liz Borino: I’m so excited! My new release will be a combination of Casting, Action, Cutaway, and That’s a Wrap. It’ll be available on Kindle and in paperback! My first print book.
Celeste Jones: Anything else you’d like to share? 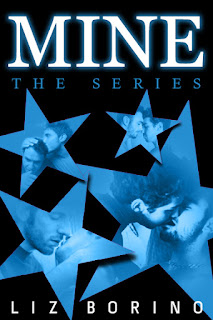 Liz Borino: Thank you so much for having me!
Celeste Jones: Where can readers connect with you?
Website: lizborino.com
Facebook: https://www.facebook.com/liz.borino.1
Goodreads: http://www.goodreads.com/author/show/4488714.Liz_Borino

Blurb/excerpt. Overall blurb (back of book) From the moment Steve Michaels met actor Zack Greene in the men’s room of a press conference, the director knew his snarkiness mixed with angelic features, excited him. What he wasn’t prepared for was the vulnerability underneath the hardened exterior. And he really wasn’t prepared to fall in love.
But they did.
Zack needed some positive press and a second chance after getting out of rehab. He found the director of Ben’s Life, the series he planned to audition for. Steve helped him within a loving structured relationship.
Follow Zack and Steve as they face the challenges of work, family, injuries, and pasts together as they redefine family.
Warning: Contains spanking, Light BDSM, Dom/sub relationship, and two men who can’t get enough of each other. Vol. 1 includes Casting, Action, Cutaway, and That’s a Wrap. E-book Paperback
Casting: Steve Michaels had one goal for the evening: drink just enough to get through the press conference in promotion of Ben’s Life, the new television series he’s directing. Plans change for him when the seedy producer of the show zeroes in his seduction efforts on Zack Greene, the bad boy of the moment. Now, Steve has to make sure Zack doesn’t sue.
Instead of finding the hardened bad boy he expected, Steve finds a vulnerable man whom life has beaten down. Can Steve help build him back up with a loving structured relationship? Find out how being cast in right roles enriches their careers and lives. Smashwords
Action: When the bright lights and flashing cameras of Hollywood capture your every move, how can you fulfill your deepest desires? For Zack Greene, a formerly out-of-control actor, and Steve Michaels, the director who unearthed the heart of the man beneath the ego, it’s a constant struggle.
In public, Steve and Zack are the picture of professional partners. However, behind closed doors, their partnership is taken to a new level. They engage in a carefully constructed Dom/sub relationship that not only brings them pleasure, but keeps Zack from slipping back into his wild ways.
Their delicate balance is thrown askew when a producer on the show threatens to expose their lifestyle, while taking advantage of Zack in a moment of vulnerability. Will Steve be able to ease the pain and save the love they share? Or will they come apart when they need each other most? Amazon
Cutaway:  Two years after Steve Michaels called, “Action!” on a new phase in his career as co-producer on the television show Ben’s Life, the lights go up again on his Dom/sub relationship with actor Zack Greene, but Hollywood cameras don’t always capture the truth.
A mention of Steve’s past in the BDSM scene has Zack craving new ways for them to connect. All of the couple’s concerns fall away when Steve and his ex, Peter, are in a car accident. The last ones to know, Zack and Josh, Peter’s slave, rush to the hospital. The injuries from the accident force the dominant man to set aside his pride and accept help from Zack. Will the couple get to explore new boundaries in their relationship or will the dependency Cutaway the structure holding their relationship in place? Amazon
That’s a Wrap: As the bright lights of Hollywood dim, futures, relationships, and identities are thrown into question. The once successful television show, Ben’s Life, is in big trouble. For Steve Michaels, the director, in a long-term Dom/sub relationship with Zack Greene, the lead actor, this means impending unemployment.
Through training Josh as their domestic slave, coupled with the care he received during recovery from a debilitating car accident, Steve opens himself up to role reversal in his relationship with Zack. The occasional release of control on Steve’s part, and Zack’s adeptness at taking it, grants them freedom and stability to meet challenges as a unit.
But when the life they had planned is put in jeopardy by one phone call, Steve and Zack will need to expand the safe haven they’ve created together to include one more. Priorities shift and a different light shines the way to new beginnings. Amazon