Mary Wehr is Here to Talk About Her Heart's Desire

Happy Wednesday Everyone! Let's give a big warm spanking welcome to Mary Wehr who is here to talk about her latest book, Her Heart's Desire.


Celeste Jones: Welcome Mary! Please tell us a bit about yourself.


Mary Wehr:  Thank you so much for hosting me, Celeste.
There really isn’t much to tell. I’m an avid animal lover and I love reading romance stories with stern sexy heroes and sassy heroines.  I also like to hop on Facebook and share a chuckle or two J
Celeste Jones:  What is your writing day like? Do you have a set schedule?


Mary Wehr: I can’t really say that I follow a schedule. During the warmer months I like to spend as much time outside as I can so not a lot of writing gets done. When I’m doing yard work I think about my works in progress and different story lines. Then, during the Winter, especially after the holidays are over I start writing. I do make notes from time to time when I think of something mostly because if I don’t I’ll forgetJ


Celeste Jones: Your latest book is a ménage book involving two brothers. Can you tell us more about this book?


Mary Wehr: Sure. My heroine, Sara had a tough time growing up without a mother. Her father drank and the only two people she had been able to depend on were her neighbors, Cade and Reese Dalton. Her aunt had helped raise her but the nasty old woman also filled her head with sordid tales about her mother leaving her behind so she could live and have sex with two men. Cade and Reese protected her as much as they could from the gossip but their life hadn’t been easy either. They couldn’t take their father’s verbal abuse any longer so after they had finished school they moved away. Sara missed them, especially Cade, but when he finally came back home she was shocked to find out that he and Reese shared women. It took a lot for Cade to convince her that he would do anything, even give up his lifestyle, to be with her. Sara had given him a rough time before she agreed to marry him. Not long after their marriage she finds herself fantasizing about Reese and that poses a problem. How can she tell her husband she wants his brother after all she had put him through?


Mary Wehr: As with any genre an author needs to ‘show’ the reader what’s going on and not just tell the story. Sometimes I’m not so sure I have that mastered yet L I mean, I know what’s happening, but the reader doesn’t so I need to put myself in the readers head and make it real.


Celeste Jones: Are you working on a book now?


Mary Wehr: Yes. As a matter of fact I have three that are outlined. The characters are all in place. ‘Callie’s Reckoning’ is a short story involving Domestic Discipline. Rebel Ink published that one for me so I’m hoping they take my next one involving Callie and Brandon as they continue into this lifestyle after getting married. LOL. Brandon still has his hands full with his feisty lady.


‘A Heart’s Endeavor’ was my first book with Beachwalk Press. ‘Her Heart’s Desire’ is my second with this fantastic publisher and includes a scene with Jack and Melanie who are the main characters in my first book. These two books have the same three female characters but can be read as standalones. Stacy’s story is next. I also have another HOH story that I’m working on but I hope to achieve a bigger goal with that oneJ 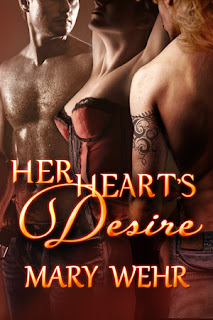 Mary Wehr:  Oh yes, I’d like to share a group hug to all the readers out there who purchased my books. Because of you, ‘Her Heart’s Desire’ received a nice shiny silver star on the Allromance web-site and is on the best sellers list for Beachwalk PressJ


Will the shame of her mother’s betrayal prevent Sara from having her heart’s desire?


But six months into the marriage Sara’s brother-in-law was beginning to look mighty fine. She regretted passing on the chance to be between the two sexy Dalton brothers, but after her violent reaction to Cade’s suggestion she was too ashamed to admit she had changed her mind. And too ashamed to admit she wanted the same sordid lifestyle her mother had chosen.