Thianna D has been on a marathon blog tour and I am honored to have her here for the grand finale.
Thanks, Celeste, for letting my book tour be on your blog today:)


This is day 16 – last day! – of the As Natural As Breathing Book Blog Tour. Have you been reading along? If not, you can find all the posts here.


Celeste Jones: Your new book, As Natural As Breathing, is a gay DD romance. I’m sure you’ve been asked this before, but how did you get into writing gay romance?


Thianna D:  You know, it is kind of strange. I had never read a gay romance and one day in 2009 I was writing a short story, not having any idea who the hero would end up with and about two-thirds of the way through, it became crystal clear that his partner was a man he had known for many, many years. That, in turn, made me start looking for gay romance fiction to read. The friction and dynamics between two men is an amazing thing to write.


Celeste Jones: I see that you have some self-published books but As Natural As Breathing is being published by Lazy Day. Is this your first book with a traditional publisher? If so, what do you think of the experience?


Thianna D: This was my first book with a traditional publisher. And I am very happy with the experience. Not only was it so much easier in some aspects, but there is something to knowing you are part of a publishing family and that you have someone else wanting you to be a success. Plus, I will admit it. As an author, it makes you feel good to know a publishing house recognizes your talent.
Celeste Jones: Are you “out” with friends and family about your life as Thianna D?
Thianna D: Well, yes and no. To the world, I keep my two writing names somewhat separated as I do write YA fiction as well and don’t want that to be an issue. But as far as my family and friends. Yes, they know. My mom used to call them ‘your dirty books’ until she saw a section on CBS Sunday Morning on how Erotica is the best-selling genre out there. Now she actually calls them ‘erotica’ and encourages me to keep writing.
But, I ‘outed’ myself in big way a few years ago about my involvement in the BDSM and spanking scenes. My dad chooses to still think I’m a virgin, but my mother tries to understand.


Celeste Jones: What is your writing day like? Do you have a regular schedule?
Thianna D: Mornings are more for marketing, answering emails, doing social networking. That sort of thing. Afternoons and evenings are my time to write. I can get into such a groove that I will write for 4-6 hours without moving sometimes. Unfortunately, as I am sure you know, characters like to talk at the strangest times – like 3 a.m. – so I have a little recorder handy by my bedside so if I do not want to get up and turn on my computer I can just talk out the basics of whatever the character is going on about and then hopefully fall right back to sleep. Sometimes that works, sometimes it does not.


Celeste Jones: Are you a plotter or a panstster? 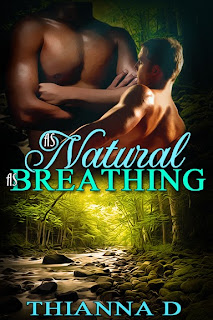 Thianna D: Oh, I write by the seat of my pants…mostly. For longer novels or for series, I will plan out large plot points. But it is usually one-liners. Like for part II of As Natural As Breathing, I wrote down:


That was all the plotting I used before letting my fingers dance across the keys :)


Celeste Jones: What is it about As Natural As Breathing that you particularly like? What do you want readers to take away from this story?
Thianna D: Oh, how to narrow it down? I think first off, I want people to realize that a romance between two men is just as natural as a romance between anyone else. Logan and Christian are amazing men and I hope the readers will come out with an intense love for these two like I have.


Christian is a very scarred individual at the beginning of the book, both physically and emotionally. He goes through a lot to get where he is at the end of it. I would hope people would begin to look at people in a slightly different manner. Look at people like Logan looks at Christian. He never sees his scars as ugly. Instead he sees each one as proof of the strength in the man he is in love with.


Excerpt:
In this excerpt, Logan takes a look at his boyfriend. A really good look after they removed their clothes.


As soon as they were off, Logan looked down at Christian’s body. “Damn,” he grunted. Everything was in perfect proportion. Nice lean legs, thin hips, and a long torso, and between those hips was his cock. Logan licked his lips absentmindedly as he eyed the monster between Christian’s legs. He knew the other man wasn’t ready and yet he desired to lean down and take it in his mouth, to taste his pre-cum, to deep throat him until he yelled. And yet, the wonderful piece of flesh in front of him was over nine inches long and thicker than any cock he had dealt with before.


Mentally shaking himself, he let his eyes continue to peruse his boy. Then he saw them. Patches of strange-looking skin, all that was left physically of the grenade bombing, covered Christian’s entire left side. Kneeling between Christian’s legs, he reached over and began to trace them. The man underneath him shuddered and he stopped. “I won’t touch them if you don’t want me to,” he said quietly.
“It’s not that,” Christian replied. “I just don’t want you to see my ugliness.”


Logan’s head jerked up and he stared into Christian’s worried face. Leaning forward, he shook his head. “You are not ugly, Christian Darringer. You’ve been through hell. These,” Logan ran his hand over the longest scar that ran from Christian’s shoulder all the way down to his hip, “are your battle wounds. They just prove the mettle of the man inside. You shouldn’t have survived that, but you did. You are a strong…” He leaned down and kissed him. “Wonderful…” He moved and kissed the scar. “Intelligent…” He kissed another scar. “Fantastic…”

Book Description:
As Natural As Breathing


For Christian Darringer, life isn’t worth living. Just back from the Middle East; scarred and with permanent damage to one leg, he does not think anyone will want him for anything. Meeting a gorgeous man he finds himself thinking about constantly is not in his plans. Pulled toward the startling younger man with striking blue eyes, he begins to question a lot of things – especially his sexuality. Not one to hide from a challenge, he plunges ahead only to find himself more than just attracted to Logan who is full of life and joy, he finds himself head over heels in love.


Logan Mannette has almost everything he ever wanted: loving parents, happiness, friends and security. The only thing missing is finding the love of his life, a love that is just like his parents’. When he meets Christian at a party, everything changes. Instantly attracted, he does his best to help this sad man and quickly finds himself feeling more than he has ever felt before. Raised in a domestic discipline household, he holds that ideal as what he wants but his interest in spanking became a fetish and when Christian admits that he wants to be spanked, Logan believes he might have found the perfect man.
Just as everything begins for them, Christian’s past intercedes and one of his brothers makes waves about him dating a man. If it weren’t for Logan’s support, he might fold; but with the love of one amazing man, Christian finds that living his life rather than just existing is as natural as breathing.


You can find As Natural As Breathing at:
Amazon
Amazon UK


You can find out more of what is going on with her at:
Thianna D’s Blog

Tune in tomorrow to get the URL for the next stop on the As Natural As Breathing Book Blog Tour. Now, get your entry for my giveaway:
a Rafflecopter giveaway

Email ThisBlogThis!Share to TwitterShare to FacebookShare to Pinterest
Labels: As Natural As Breathing, Thianna D