Being of an age where I can remember when blow dryers were new-fangled, I have an appreciation for what it might have been like for a Regency Era woman to try to have decent looking hair. Usually, for a lady at least, styling duties were handled by her lady's maid. In fact, being able to style hair could make a lady's maid very desirable and increase her possible (though still meager) earnings.

If a woman wanted curly hair they heated an iron in the fire. Youch!

What would hairstyling be without the proper implements.

Aren't these wonderful? That comb looks pretty heavy duty too.


In Lady Katherine's Comeuppance, Katherine's hair brush played a rather important role.
It started here:
Where her hair brush ought to have been, there was a sealed note, the name “Katherine” written in a distinctly masculine hand.
The air left her lungs and she looked around to see if her maid had noticed. Seeing she had not, Katherine opened the note.
Do not take down your hair. It is a pleasure I wish to have for myself.
Her fingers shook as she folded the note and slipped it into a drawer of her dressing table as silently as possible.
She looked at herself in the mirror. Her eyes were bright and her cheeks were flushed. She could also see the tips of her breasts had suddenly hardened to stretch against the thin fabric of her nightgown. 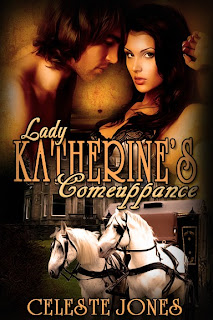 When her maid came to stand behind her and reached for the pins in her hair, Katherine stopped her. “You look tired,” she said to the shocked servant. “I shall take the pins out myself. Good night.”
The maid looked at her in stunned disbelief before she turned and left the room.
Showed up again here:
His hands moved to her hair and began to remove the pins holding her tresses in place. He somehow managed to remove the pins in such a manner that her hair fell all at one time into long shimmering cascades down her back. When he stroked his hands the length of her hair her mouth went dry while her lady parts became instantly damp. “Shall I tell you a secret?” he asked, his voice a rasp of husky desire. She nodded. “The first day I arrived in London, I walked into this house unannounced and heard you talking in the parlor to a friend of yours.”
Her eyes, which had begun to droop with the sensuous feel of his hands on her hair, flew open and she strained to recollect the substance of their conversation. As though he had read her thoughts he filled in the missing information for her. “It sounded to me as though you planned to use your feminine wiles to convince me not to turn you out on the street.”
Her mouth gaped and she wondered what he intended to say, and do, next.
He picked up a hairbrush—her hairbrush—and stroked the bristles through her locks in a sensual caress.
And here:
She reached out for him again, expecting he would welcome her enthusiasm. Instead, she felt a sharp crack against her bottom.
The hairbrush!
The flat paddle design which made it ideal for stroking her tresses to a glowing shine also made for a most intense spanking implement.
Her mouth, which still tingled from his kiss, opened in astonishment. Another swat from the brush and she turned to look in the mirror. During the kiss they had moved so that instead of facing the mirror full on, she now stood within the circle of Thomas’ arms, her hair draped over her shoulders and down her back, but not far enough to cover the globes of her backside which were now changing from creamy to pink.
Thomas had also turned his head to look in the mirror. He stroked one hand over the pink tinged orb of her rear end and they both watched the color deepen with his touch. Their eyes met in the reflection. Apparently sensing her question, Thomas said, “Tonight is about me pleasuring you. The swat to your rear end was meant to get your attention and remind you to comply with my directions and only act on my instructions.”
You can read all about Lady Katherine, Thomas and the hair brush in just two days. Yippee!
at August 12, 2013