I used to write stories for Discipline and Desire. Compared to most, my stories are pretty tame, so you can imagine my surprise when one of my short stories came back as unacceptable. I posted it on my blog as "My Banned Story" and it got the most pv's of any post. In fact, I took it down for that reason, because it annoyed me that people sought it out because it was banned.

A couple people actually asked why it was banned, since it was a pretty tame story. The answer? At the beginning of the story the heroine, who was a chubby little girl, flashes back to time when she was five or six and her snobby aunt had a party where her daughters passed on their unwanted school clothes to the other members of the family. It include a scene, which was innocent and cute (IMO) where the young girls were in their undies trying on the clothes.

But, they said they couldn't publish it because it involved little girls in their undies. Understandable and it sort of made me a little queasy to think that what I had envisioned in my brain as a sweet sort of scene could be construed as highly icky.

More recently, one of my dear books, The Birthday Wish/Wishing For A Spanking has found itself banished to the dungeons of Amazon (as one blogger put it) with an Adult Tag. I must admit that I have been stymied over why this book never sold better and now I think I know why. The covers were too naughty. First there was this one, made by me: 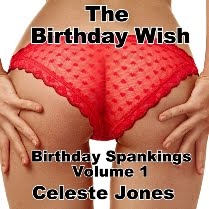 I suppose the fact that you can see butt crack might make it offensive. Ooops.
So I hired The Cover Artisan (see their jazzy pink button over there---->) to create a new one. 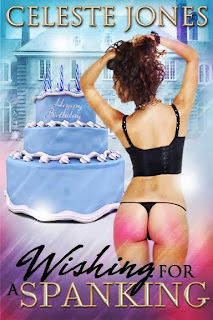 Lovely, isn't it?
Apparently the book is still in the dungeon, either because it was marked that way before or because this cover is also too naughty.
What is particularly amusing/annoying about this is that for those of you who have read this story, it's sooo tame. It's sexy, I think. And funny. But hardly the stuff that people need to be warned about or protected from.
Sigh.
So I am going to have to take the book down, give it a new cover and new title and start all over again.
Until then, if you dare go into the Amazon dungeon, you can buy this book for 99 cents. Just click here.
at August 28, 2013