Hoops and Bustles and Corsets, Oh My!

For the next two weeks, Regency 101 is being renamed Victorian 101. Please welcome Maddie Taylor


Hoops and Bustles and Corsets, Oh My!
Part 1 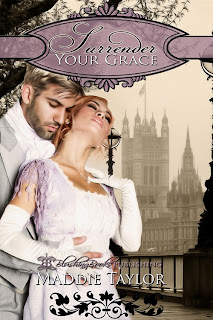 By Maddie Taylor
Thank you, Celeste for asking me to participate in your blog.
Of course, my research for my most recent book was for The Victorian Era which spanned the 64 year rule of Queen Victoria, from 1837-1901.  This period is known for its outwardly prudish moral strictures; the key word being “outward”.   Because we know that behind closed doors the Victorians weren’t quite as prudish as they wanted folks to believe, because they did like their bare bottomed discipline.
During this period, laws were imposed banning public obscenity and vulgarity.  One such law was the Obscene Publication Acts of 1857 which banned “obscene and depraved publications” that might corrupt the public, those poor helpless sheep.   Alas, my fellow readers and writers of spanking romance; we would have been imprisoned and locked in the stocks, paddled or birched for public entertainment.  Hm, well... Maybe that wouldn’t have been all bad.
But I love this era, the dominant men, the submissive women, and the prevalent use of domestic discipline, the fashion, the slang, the rituals and etiquette.  There is so much I could talk about, but I thought it would be nice to follow Renee’s contribution on the Regency period for comparison.
So, let’s talk fashion.  In particular; corsets, bustles, split drawers and accessories!  Of course, my focus was on the members of the elite class.  They could afford the very best and newest designs and adhered to all the newest fashion trends.  The working and middle-class didn’t have to worry about hoops, crinolines and corsets, those lucky girls

Like Renee, I also chose the time period based on the fashion, but I wanted my hero to have to work a bit to give his lady her comeuppance.  So I chose the mid-1865-1872 as the setting for my novel, “Surrender Your Grace”.    In this scene, Andrew who is a forward thinking man and not at all in favor of a corset, discovers that his new bride is wearing a corset for a ride in the country on their private estate.
“Stuff and nonsense, husband,” she protested as her cheeks bloomed with heat and she became miffed at his behavior.  “You can’t possibly strip me of my clothes here in the stable where anyone could walk in and see.”
“Watch your tone with me, wife.  I’ve no intention of stripping you naked.  I am merely removing this ridiculous corset.  It's not safe to go riding in the countryside all trussed up like a Christmas turkey.  I can’t imagine these contraptions do much for your health either what with your insides all compressed and squeezed.”
“But I can’t go without a corset, Andrew.  It’s indecent.  People will think I’m a three penny upright, or worse.”
Shocked that she knew the dock worker slang for a prostitute, he paused to frown down at his young bride.  “Such language Cecilia, where did a lady of your breeding hear such low class cant?”
“Excuse me?  Weren’t you the one giving me a vulgarity lesson just a few short hours ago?”
“Mind your tone and guard your tongue, woman.  What’s tolerable for a gentleman is not suitable for a lady.  I’ll have to watch what I say if you’re going to pick up such vulgar dialect.  Now be still, I won’t warn you again.”  He pulled her blouse off and then began to work on the tightly laced corset.  He had to also loosen her skirt to remove it.  The knots in the lacings confounded him and he cursed under his breath.  “Damn women’s trappings.”  Bending he pulled his knife from his boot and efficiently cut the lacings before pulling the steel and linen from her torso and throwing it on the straw covered floor.
“That was one of my best corsets I’ll have you know.  It was quite expensive, too.”  She huffed at him under her breath.
“Stop grumbling or I’ll take you over my knee right now.  Just look around wife, there are plenty of interesting implements I could use to help you regain your composure.”  He watched her look around the dimly lit tack room.  After staring wide-eyed at the sight of the straps, crops and long handle brushes, she instantly took on a more de
mure demeanor.  “Smart girl; now stand still while I set your clothing to rights.”
Celeste, since you said you like a history lesson… Here is a bit of fashion history for the decade 1860-1870.
At the beginning of the decade the hoop skirt was all the rage.  Remember Scarlet O’hara?  The fashion was for a tiny waist and wide hope skirt, even a more curvy girl then Scarlet would be able to have the perception of a very tiny waist with use of a corset and the wide bell shaped skirt.  The ladies thought this an improvement over the layers upon layers of petticoats and crinolines in decades before. 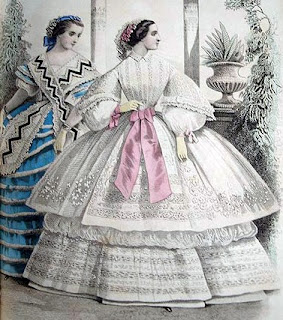 But, oh my!  However did these women walk through doorways, dance, sit or cozy up to their man?   And even more curious, how on earth did they tinkle?  Here’s a teaser… I talk about that a little later, in part 2. <teasing grin> 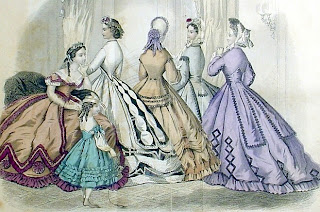 By the mid1860’s the hoops became elongated so the bulk of the hoop was at the back.  A lady could get closer to her gentleman for chatting or dancing, but there is still the problem of sitting!


For more information about the Victorian Era and fashion read “Surrender Your Grace”, although fiction, I have included historical facts from the era.  Available now from


Or visit some of these Victorian websites which were used for research in this article: