Naughty List Week: A Father for Nicholas by Dinah McLeod

In case you haven't heard, perhaps as the result of excessive eggnog consumption, there's a new boxed set out with a whopping five Christmas themed stories from five of my favorite spanking authors. The Naughty List is 430 spankalicious pages all in one place. And for a limited time, the boxed set is half price. No coupon necessary.
Amazon Buy Link

This week I am featuring all five stories so be sure to scroll down to see if you've missed anything and come back tomorrow and the next day for more.

I've also asked each author to share a favorite Christmas memory, so you get a little sneak peak into who is really on The Naughty List.

Today's featured story (which can also be bought on its own) is A Father For Nicholas by Dinah Mcleod. 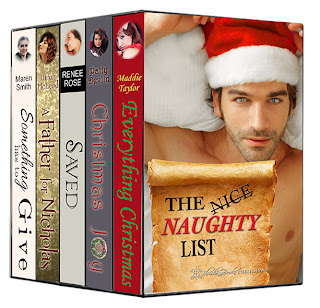 Clara Jones no longer looks forward to Christmas with the same wide-eyed wonder of a child. A busy social worker, she sees more than her fair share of troubles every day. To her, December is a month full of bleak, depressing episodes. She is overworked and overwhelmed, and to top it off, her once delightful little boy has turned into a sullen thirteen-year-old, suspended from school for some mischief that went sour. Then along comes Adam, the too-handsome EMT who seems to have a special rapport with her son. Can he and his domestic discipline give her what she desperately needs?

She’d been late getting off work, late picking up her son from school. Not that he wasn’t used to it, this was the third time this week. Clara couldn’t remember when she’d been so tired, so utterly drained, and she still had to go home and cook dinner.
“How was your day?” she asked her son, Nicholas. She glanced in the rearview mirror and saw him roll his eyes.
“It was swell, Mom. How was your day?”
“I don’t need attitude from you right now,” she sighed, hitting the brakes as she approached a stop sign. “It’s just a question.”
“Yeah, whatever.” 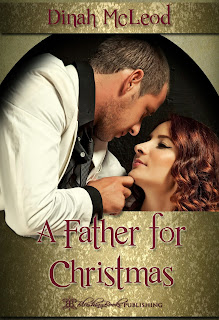 “There was a math test today, right?”
“Mom.” He couldn’t have sounded more annoyed if he tried, and he was trying.
“I am supposed to take an interest in you, Nick. You may hate it, and you know what? So do I sometimes. Still, I’m your mom, and I’m asking you how your test went.”
He sighed heavily, as though he couldn’t see how someone so cool could be related to him. “I bombed it, OK? Happy now?”
She glanced sharply over her shoulder. “No, I am not happy now. I thought you said you were ready. What happened?”
“Look, it’ll be what it’ll be, OK? There’ll be other tests, trust me.”
“That’s not the point. What if—”
“Hey, Mom, is that your phone?” he asked with another loud sigh. His third since he’d gotten into the car.
“Yes,” she replied, tight-lipped and annoyed at the distraction. It wasn’t like she hadn’t heard it ringing, same as he had.
“Are you gonna get it?”
Glancing in the rearview mirror again, she saw his long, sandy bangs falling over his dark eyes that looked so much like his father’s that it hurt her every time she saw them. Thirteen. Everyone had told her it would be a bitch, and they weren’t lyin’. She reached down and picked up the ringing phone. She hit “reject” and set it down again without so much as a word. She knew who’d be on the other end: another bill collector, another snotty-nosed man judging her when she admitted that she couldn’t pay. But he was probably balding and being cheated on by his wife, so it all worked out. At least, that’s what she told herself.
She knew Nicholas thought himself a man—didn’t all teenage boys? Especially those without fathers, like her son. His dad had been out of the picture—she usually claimed he was dead, because it stopped conversation flat and didn’t garner the curious stares and awkward questions that had followed them for three years now. Everyone told her she should start dating, get back out there again. They thought all she needed was a handsome, authoritative man to come into her life and set things right. The thought of having to meet someone and gain their interest was exhausting. She’d much rather go home and have a nice, hot bath and pretend to be someone else.

Buy link for A Father For Nicholas: Amazon

When I was growing up more often than not we spent Christmas is Louisiana with my grandparents. “We” consisted of myself, my sister, and four cousins. There was only one boy in the whole lot, and we girls shared a room. Now, normally all five of us piled up in bed together on Christmas Eve. One of us would wake up to signal to the others and we’d creep down the hall, past the closed bedroom doors and go have a look at our gifts. (Our parents left a lot of them unwrapped so you could see most of your toys if you got up in the middle of the night!)
The Christmas I was eight it was business as usual. I don’t remember what happened, but somehow I ended up sleeping with my mom. I’m certain it must have been a punishment for something—and I’m equally as certain that I was wrongly convicted! I was very cute at eight, y’all!
Anyway, somehow I managed to forget the change of bed routine and ended up shaking my mom awake in the middle of the night. “C’mon!” I whispered. “Let’s go see our presents!”
“What?” she asked sleepily, and hearing her voice, my heart jumped into my throat as I realized my mistake.
“I had a nightmare,” I replied, still in a whisper.


Somehow, my mother never did remember that conversation and it’s a Christmas memory that I’ve never forgotten. I can’t remember what I got that year, but I will probably never forget almost outing myself to my mom for the snooper I was! She still has no idea…what do you think, should I tell her?