.We're in the home stretch of Naughty List Week. Today, Patty Devlin (who I am sure has never been on any naughty lists. har har) is my guest sharing from her story, Christmas Joy, which is part of the fabulous boxed set, The Naughty List ---Five Christmas Themed Spanking Novellas, which is currently half price. Each book is also available separately. How many different options can you get?

Joy hitches a ride headed to the Double R ranch, looking for a job. She is desperate to find a place to stay before the snow flies, however, she isn’t prepared for the feelings the large, sexy and entirely dominant man, who finds her, stirs up deep inside her.
Living on the road has been hard and with her past she should stay and beg for the job. But running is easier than dealing with her fears and these new feelings, isn’t it?
Nick is used to being in charge, after all he has been the one taking care of his brothers for years. So, he knows just what Joy needs—and he’s more than willing to put her over his knee and give it to her.
Nick’s also used to people leaving. He’s not used to having a chance to change it. Can he find her, convince her to trust him, and bring her back? 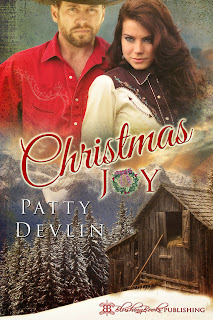 Will Nick be able to bring Joy into his home, his heart, and keep her there—for good, not just for Christmas?
Buy it Now! Blushing Books or Amazon
Buy The Naughty List

A Christmas Memory From Patty:

A funny Christmas memory? Dang, if only I had a memory...  Well, lemme see. Our first Christmas after our daughter was born, my husband and I went out with my parents and brother to get a real tree- just like my family always did. I'm sure it was beautiful. You have to find the best tree! Only the best will do... In fact we would find our tree much like the scene in my book, Christmas Joy.

Anyway, after a couple days of having our most beautiful, wonderful, amazing (you get the picture) real Christmas tree our six month old baby girl's eyes started to swell. She'd been getting really congested and her eyes had started to drain and get crusty. It clearly wasn't a normal cold and at the same time we were beginning to think she might be having an allergic reaction, my mother-in-law told Dev it was probably the tree. It seems he was allergic to Christmas trees as a baby too.

So out went the tree and lo and behold she did clear up pretty fast. Now that isn't the funny story. What is funny is that my redneck husband didn't want to go through buying an artificial tree, (it was only a couple days until Christmas). So while I was gone one day, he shaped the strands of Christmas lights into the shape of a tree on the wall and hung the ornaments from it. We still have the picture of it, too. It was pretty funny looking, but he was rather proud of it. Sigh.

Now, for the first time since then- we've decided to try a real tree again, and so far so good. We shall see..

That Dev, he sure is creative. Thanks, Patty!