Letters to Santa from The Vengeance of Mrs. Claus

My dear friend, Anastasia Vitsky, has just published her first book, The Vengeance of Mrs. Claus. I'm pleased to be able to share her letters to Santa from Claire and Minelle as well as a blurb and excerpt from the book. HoHoHo! 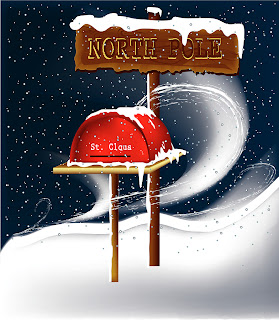 My friend Ana says that you’re real.  She also says that I’m on your naughty list!  It’s not fair.  My parents have told me all my life that you are a fairy tale, so I didn’t know I was supposed to be good.  Plus, you never defined what you meant by “good”.

Here’s the problem.  I need a new phone for Christmas.  Since I didn’t know about you, I can’t be held responsible for anything on your list.  Right?  How about if you give me the phone and I’ll be good next year?

My daughter Claire just turned 21 this week, and she still seems like a child in so many ways.  I don’t think she’s ready for Christmas yet this year.  Could you spare her, just this once?

About the coal I’ll be getting this year…all I can say is that if you had to raise a teenager you’d have trouble behaving, too.

Blurb for The Vengeance of Mrs. Claus

In some countries, turning 21 means gaining the right to vote and drink alcoholic beverages.  For Claire Labraun, the Christmas after her 21st birthday would be beyond her wildest imagination.

Minelle and Matthew Labraun believed in a traditional marriage.  Matthew was head of their household, and Minelle was his helpmeet.  When it came to raising their headstrong 21-year-old daughter, however, they found themselves at a loss.  Minelle had always taught Claire to do the right thing for right’s sake.  Claire, however, had different ideas.  She rebelled against their rules, flaunted authority, and connived to get things she wanted.  She had never been spanked in her life; Matthew and Minelle kept that adult privilege strictly between themselves.  But this year, a visit from Santa plus Claire’s newly adult status would change her idea of Christmas forever.

Excerpt from The Vengeance of Mrs. Claus

Minelle gave a nervous giggle.  “Matthew,” she whispered as she ran a hand down his arm, “slow down.  I don’t even know what we’re doing.”
Matthew gave a flick to his wrist that sent the soft, silky strands of the flogger playing across her breasts.  “I am,” he said slowly, “performing my duties as a husband to my wife.”  He unbuttoned her blouse further.
“No, no, what if the kids come in early?  We can’t…” 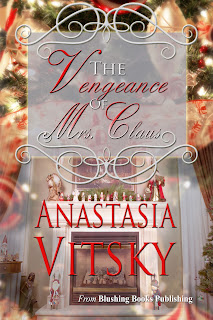 Matthew finished unbuttoning her blouse and tossed it aside.  He let the flogger dance across her newly bare flesh, smiling in open delight and desire as she began responding despite her protests to the contrary.
“I should work on my lesson plans for tomorrow, get dinner started…the chicken needs to thaw…”
“Do you honestly think,” Matthew growled, taking her into his arms, “I’m interested in dinner right now?”
Minelle gave a little shriek, blushed, and nuzzled her cheek against his rough denim shirt.  “We’re sensible adults and parents,” she protested.  “Too old for this foolishness.  Now let me go and…”
Matthew reached for her pants and tugged at the elastic waist.  “Careful what you say,” he warned.  “Don’t forget I’m older than you are.  Are you calling me old, little girl?”
Minelle blushed.  She had been just seventeen when the twenty-four-year-old Matthew started courting her, and he was her first and only boyfriend.  Sometimes she felt too young for him even now in the midst of comfortable middle age, but at other times she felt much older and wiser.  On their first dates, though, when he taught her about kissing he had teased her by calling her his “little girl”.  His friends called him a cradle-snatcher.  Just barely twenty-two when they married and twenty-three and twenty-five when their children were born, she often felt she had grown up right alongside their babies.  It was ridiculous after all these years for him to still call her “little girl,” but something inside of her tingled at the name.
“Yes,” she whispered, trying to ignore the funny flips in her stomach as he eased her pants and then her silly granny panties first down to her knees and then completely off.  “You’re far too old for this nonsense and I should put my clothes back on and take that chicken out of the freezer…”
“Put a hand on your clothes and I’ll stop playing nice with the flogger.”
Matthew’s voice cut her short.  Minelle gave another little giggle and glanced up entreatingly at her husband of just over twenty years.  “Honey…”
Matthew set the flogger down and fingered the buckle on his belt.  “Or there are other ways to make you listen…”
Minelle gave a delicious shiver.  She didn’t have time for this, she told herself.  Except her body wouldn’t listen.  Matthew’s work-roughened hands turned her onto her stomach and explored every inch of her, a heavy callused palm landing on her bottom.
“Ouch!” she exclaimed.
Matthew bent over and held her hair away from her neck, kissing the little bone that jutted out at the top of her spine and then working his way down the length of her back.  At each kiss she shivered half with delight and half with anticipation.  “Now let’s talk about this silly diet of yours,” he began.

Email ThisBlogThis!Share to TwitterShare to FacebookShare to Pinterest
Labels: Anastasia Vitsky, Letters To Santa, The Vengeance of Mrs. Claus