Book Spotlight: Whip It Up

A good meal can be supremely sensual. Entering a dining room filled with a divine aroma, soft music playing in the background, a handsome dining companion, and some savory dishes to feast upon all make for a delightful evening.

Here’s the blurb for “Subterfudge” – Normandie's story in the “Whip It Up Anthology”: 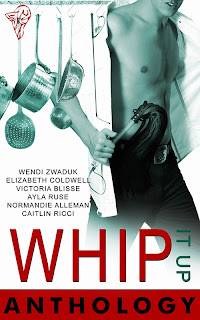 When Roger asks his live-in sub Ashley to learn to cook she eagerly agrees, assuming it’s going to be a breeze. After all, she’s a bright, accomplished woman with a successful career—how hard can it be to prepare some food?

Something soft and fluffy drifted up the inside of one of her legs, barely passing over her crotch before it glided down her other leg. It could have been a feather…a frilly, lush sensation. Yes, please.
“I know how much you like being tied up…do you think I need to do that to you tonight?”
“Yes, Sir.” Her voice quivered with need.
“Good thing I brought these, then.” He clutched her wrists and bound her with the familiar cloth restraints that he used with her so frequently. Her hands were confined above her head, their movement restricted to a few inches in each direction.
“Spread your legs for me.”
Ashley obeyed. The air in the room was chilly. A sense of vulnerability came over her. It reminded her of that feeling when you’re a patient in a cold, sterile hospital room.
Then she felt his mouth on her. She lurched and gasped for air when he buried his face in her mound. Tongue licking, nose nudging, teeth nipping, his hot breath coated her with his own lust. He had her quaking in moments.
She was on the verge of climax when he stopped.
Bastard! He’s teasing me. She was breathless, at the peak of arousal. He loves seeing me like a bitch in heat.
“I’m going to play with you with some unusual toys. I want you to try and guess what they are. I will help you along, but you give your best guess. Ready?”
“Yes, Sir.” She nodded.
Thwack! She felt something on the inside of her leg. What is that?
“Keep your legs spread.” His voice issued a warning.
“Yes, Sir. Sorry, Sir.”
More swats from the unknown implement. That feels familiar. What is it? When have I felt it before?
Then a swat to her pussy woke her up. The sting wasn’t terrible, but it definitely brought the blood to the surface and made her cry out.
“What am I smacking you with, little sub?”
“I’m not sure…”

Learn more about the other stories and pick up your copy of the Whip It Up Anthology today:
Amazon: http://amzn.to/18ZUNuZ
Barnes & Noble: http://bit.ly/1fPphHu
ARe: http://bit.ly/1bGrEax
Totally Bound: http://www.totallybound.com/whip-it-up-anthology

About the Author:
A former psychologist, Normandie has always been fascinated by human behavior. She loves writing quirky characters that are all too human. Fiber arts, baking, and Pinterest are a few of her favorite pastimes. She lives on a farm with a passel of kids, her adorable husband, and a pet pig who’s crazy for Red Bull.