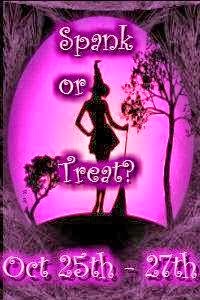 In honor of Spank or Treat the Spanking Stories Book Club will not be meeting today so that you can enjoy all the festivities of Spank Or Treat.

November 1, 2013
Switch (The Trainer) by Kate Richards
Esme Stone’s marriage is on the rocks. Her husband, Rick, has Peter Pan Syndrome to the extreme, partying till all hours and spending every dime he makes. She cooks, cleans, earns the money for their expenses, and takes responsibility for paying the bills. In short, everything. How can she start a family when her husband is a big kid himself? Heart breaking, she considers divorce.One step from walking out, she meets a woman online, then others, who swear a Domestic Discipline agreement saved their marriages. That putting their husbands in charge helped them grow up. In hopeful desperation, Esme approaches Rick with an ultimatum.Take charge or take a hike. They jump in with both feet and then come up against a wall. Rick needs help with the discipline elements he must employ. Spank Esme?

November 8, 2013
The Winner (Romantek) by Patricia Green
Audrey Beacon is a winner. Because of her slogan writing ability, she's won a fabulous vacation - one which only the rich and famous get to experience. It's a big leap for her; she's a small town girl, in a dull dead-end job; she's never had an adventure. Nevertheless, she accepts the prize and is whisked away to a fabulous cruise ship and then the prize: a RAVE - a dream-generated reality adventure. She picks a time-travel RAVE, and goes to 1850s Nebraska. While in her old West adventure, Audrey meets White Star Smith, an Native American man who has little tolerance for undisciplined females. He's not hesitant to show his displeasure in order to help Audrey improve her attitude and behavior. Audrey feels totally free to let go for the first time in her controlled, unadventurous life, because of course White Star isn't real. In short order, Audrey is in love. Coming back to the real world is tough, and gets harder when Audrey realizes that White Star might actually be a real person. So what was he doing in Audrey's RAVE? That was not part of the deal! Can he love her, despite her low social status? Can she show him that she loves him, or is her heart too much to risk?

November 15, 2013
Breeder by Cara Bristol
To secure his legacy, Commander Dak, a ruling Alpha of planet Parseon, purchases Omra, a breeder slave. He intends to impregnate her, produce a son, and hand her off to his anointed beta partner. As Dak and Omra discover a sexual bliss banned by his world's law, he begins to question the traditions and ways of his people, causing him to jeopardize his command and endanger the life of the woman he has come to love.

Roxy Wilson is going through the motions. She's running her deceased grandmother's psychic readings shop, but she's not a psychic. Hoping to expand and just become a gift shop, she contacts her ex-boyfriend, Trevor Dale. Only she doesn't anticipate the feelings she's still having for him after four years of separation. Trevor could never get Roxy out of his system, and now with her so close to him again, he's reluctant to let her go. But a 40 year- old curse involving evil spells and zombies overtaking the small, seaside town of Ocean Pointe may put a stop to any sort of romantic reunion.