Liz Borino---Picking An Editor's Brain and Talking About Kinky Boots

Editors---we all need them. We want to please them, but sometimes, we butt heads.

To help sort out this relationship, I've invited Liz Borino, author and editor, to answer a few questions.

Celeste Jones:  Liz, please tell us a bit about yourself.

Liz Borino: I’m an author and editor for Lazy Day who spends far too much time in her head.

Celeste Jones: I know you are both a writer and an editor, but today I'd like to focus on your skills and experience as an editor. Can you tell us a bit about what an editor does and what it's reasonable to expect an editor to do? Are there different types of editors?

Liz Borino: I’ll start with the second question. The types of editors vary by publisher, but most manuscripts need at least one round of content editing and one round of line editing. Content editing includes identifying problems  with plot and character continuity – as well as likeability – timeline issues, point of view inconsistency, and general plot concerns. Whereas line, or copy, editing focuses on grammar, repeated words, and punctuation. Both are important, but people generally advise starting with content edits and then moving to copy edits. I don’t disagree with this suggestion. However, it’s nearly impossible for me to see problematic copy and not want to edit, so I end up always doing a little bit of both. As far as reasonable author expectations go, an editor identifies problems and can offer suggestions. BUT they are not obligated to fix the content issues. They’ll likely point out when an author has head hopped, but that doesn’t mean they will go through and fix the paragraphs to make them consistent with the majority of the manuscript.

Celeste Jones:  Has editing ruined reading for you? Are you able to read without wanting to make corrections?

Liz Borino: Celeste, between graduate school and my job as an editor I can’t exist in the world, much less enjoy entertainment properly without wanting to make corrections. Here’s a perfect example, I saw the fabulous Broadway musical, Kinky Boots, back in November. Fun music, great acting, unique storyline – everything you’d ever want in Broadway. Unfortunately, I could not stop picking. Example, the play begins with the main character telling his father repeatedly that he has no interest in running the family shoe factory. Then, he becomes incredulous that his father sold the factory before he died! While everyone else was bouncing to the music, all I could think was, “He finally listened and now you’re complaining! What is wrong with you?” Yes, I have problems. If anyone is curious, these are the two songs I was referring to: “Price and Sons” and “Everybody Say Yeah.” Of course this nit-picking extends to other people’s books. Not to mention the headaches reading status updates can produce.

Celeste Jones: What are some of your pet peeves as an editor?

Celeste Jones:  I know you work for Lazy Day, so you've probably edited some of my work. Is that ever a little awkward---editing for people you "know"?

Liz Borino: It can be, but as long as everyone remains professional – which Lazy Day authors are known for – it’s not an issue.

Celeste Jones: Please share your thoughts as an editor on the use of the following:

Exclamation marks: To be used mainly in dialogue.

Was: A classic sign of passive voice, which is not as evil as people make it out to be, but authors should use it with caution.

-ing words: Good way to vary the beginning of sentences. Also to be used with caution.

Dialogue tags: Oh god. I struggle with these. The best rule I can come up with is if two characters are speaking to each other, establish the order, and then use sparingly.

Celeste Jones: How has your work as an editor improved your writing?

Liz Borino: Working as an editor has improved my writing more than any other single thing I have done. Learning to identify other author’s mistakes has made me more conscientious of my own weaknesses.

Celeste Jones: How do you tell someone their story stinks without stepping on their toes?

Liz Borino: Um… very carefully. I give reasons for all my suggestions. That way, the author is better equipped to understand my logic and make their own judgment call.

Celeste Jones: What sort of feedback do you give your employers about the quality of the books you are editing? Or do you just edit and send them off to be returned to the writer?

Liz Borino: I give the publisher very detailed analyses of the quality and major problems I found.

Celeste Jones: If you could only give one or two bits of advice to writers, what would it be?

Liz Borino:  Try to find an editor who respects your style, story, and voice. After you’ve found them, please listen. 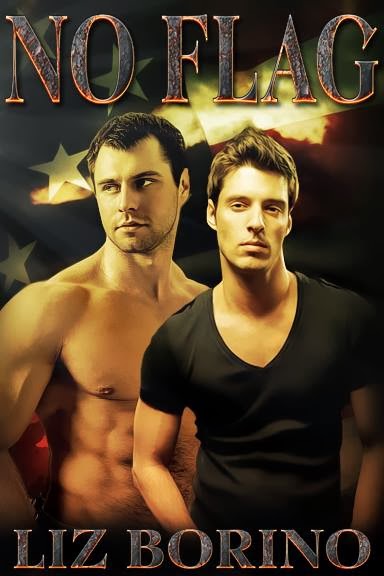 Blurb: For Mike and Will, "No Flag" meant "come home alive", but will their love survive what happens next?

Captain Mike Kelley does not ignore his intuition, so when sexy bartender Will Hayes captures his heart, Mike embarks on a mission to win him over to a Domestic Discipline relationship. Will accepts with one caveat: Mike must promise not to renew his Army commission. Mike agrees, and they spend a year building a life together, getting married, and starting a business.

Only days before their café's grand opening, Mike receives news that threatens everything he and Will have built. The Army invokes the Stop Loss military policy to involuntarily extend his commission and send him back overseas. Will, left alone to cope with the café, must rely on the support of old friends who may be no longer be trustworthy. Through emails and Skype calls, Mike and Will keep their love and structure alive...until the day a horrific terrorist attack occurs on Mike's outpost.

Mike awakens in a hospital with a devastating injury and no his memory of the attack. As the only survivor, Mike's memory may be the key to national security. Mike struggles to cope with his injury and Will struggles to support the man who always held him up. Both fear they have lost their previous relationship. Will has Mike back rather than a folded flag, but in the aftermath of war, can they rebuild the life they had before? Especially when those closest to them may not have their best interests at heart? Amazon
at February 19, 2014