The lovely ladies from With Hearts Aflame are here all week. Today's guest is Dinah McLeod who answers this probing question: What was your sweetest V-day:
The first one with my now-husband was amazing. He was my first real boyfriend and I’d never had a Valentine’s date before that didn’t include a class full of kids and a box of nerds. I wasn’t sure what to expect. He came to pick me up and while he was driving he told me to reach back in the backseat for my gift. I did and had a wonderfully sweet card and a cute teddy bear. I was very touched.
We got to a restaurant, which wasn’t fancy but it was “our” place. We ordered our usual and I listened to him talk, looking shyly across the table. Just when I thought my heart was full to bursting, he pulled a black jewelry box out of his pocket. Inside was a white-gold necklace with a heart that had a tiny diamond in the center. Small it might have been, but it was the first diamond I ever owned. I doubt I will ever forget that night. 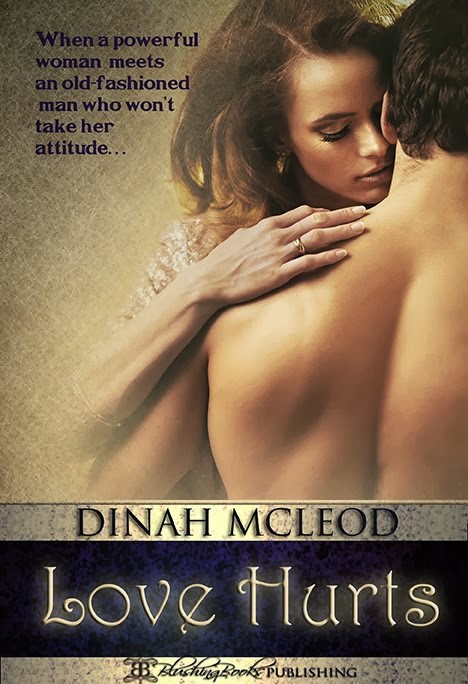 Blurb:
Karen Donahue is intimidating, but she has to be. The youngest CEO of a Fortune 500, her job is stress personified. She's used to being in charge and if she doesn't always like it, well, it's part of the job. And if she's a little bit of a brat, it's just because she works so hard.
An excuse that is not good enough for Brandon Fuller.
After Karen's car breaks down, he comes to the rescue only to be chewed out by the fiery, hot-tempered brat. He informs her that he won't fix her car unless she accepts a spanking for her behavior and having broken her phone during her last tantrum, she has little choice but to accept. What she's not prepared for is how much she'll enjoy discovering the pain that often accompanies pleasure.
Dinah's Blog- http://980875189741781282.weebly.com/
Dinah @ Blushing Books- http://www.blushingbooks.com/index.php?l=product_list&m=210
Dinah on Amazon- http://www.amazon.com/s/ref=ntt_athr_dp_sr_5?_encoding=UTF8&field-author=Dinah%20McLeod&search-alias=books&sort=relevancerank
EXCERPT:
“How long are you going to be?” I called out, anger making my voice petulant.
“As long as it takes to do a thorough job. You wouldn’t expect anything less, would you?”
“Just get it fucking done,” I muttered. I thought I’d spoken low enough under my breath for the comment to go undetected, but the minute he climbed out of the car and stood facing me, I knew better.
“What was that?” He was smiling but I could the displeasure in his arched eyebrow and the unspoken warning in his voice.
I hesitated, which was another first for me, swallowing hard as I waffled between apologizing and pretending he’d misheard me. I’d always been a bit of a spit-fire, and this was the first man I’d ever considered apologizing to for it. In the end, though, I stretched to my full 5’4 height, throwing my shoulders back and giving him the look that I’d been told was intimidating, the one I normally reserved for business meetings. “I’m late. I need you to move this along.”
“If it were that simple, I’d be done already. But as things stand right now, I don’t have the first clue what’s wrong with your vehicle and I won’t if you keep making unreasonable demands. I’m going to take the time to get this done right, or not do it at all. Your choice.”
I narrowed my eyes, but he met my eyes without flinching. He pinned me with the intensity in his gaze until I was forced to look away. I swallowed again, wondering why my mouth suddenly felt so dry. “Fine.”
“I’m sorry, I didn’t catch that.”
“Fine,” I repeated, facing him again and speaking through gritted teeth. “Do what you have to do.”
“First I’ll be needing an apology.”
Despite how calmly and matter-of-fact he sounded, I took a step back when the words registered. “A what?”
“An apology for your behavior, Ms. Donahue, along with a promise that it won’t happen again.”
Buy With Hearts Aflame Box set on Amazon.

We'll be discussing all the stories in this set on Friday for Spanking Stories Book Club so be sure to come back then for more!
at February 24, 2014