Welcome to the Milestones Blog Tour.

Today I am sharing an excerpt from my contribution, Making It 'Write'.

Making It 'Write" is the story of Jill Carpenter, newly published author, and her struggles to keep her writing career a secret. My favorite part of Making It 'Write' is Jill's work in progress, Lacy and the Professor... Enjoy! 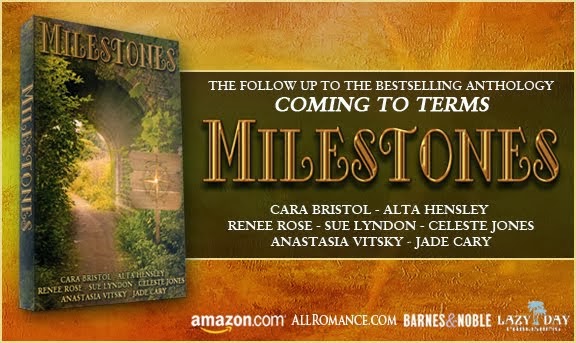 “This is what happens to naughty girls. And you have been a naughty girl, haven’t you, Miss Andrews?” Dirk’s dark eyes pierced Lacy’s soft blue gaze until she was forced to look at the floor.
“Yes,” she said, “I have been very naughty. Sir.” She licked her lips and tried to still her breathing which was amping up to an alarming level. She had said this was what she wanted, a man who would take her in hand and show her he was in charge, but now that she was about to get her wish, she questioned her sanity.
“And naughty girls wear their panties around their knees don’t they?” His voice was ominous with so many promises.
“Y-yes,” she said and moved her hands under her plaid skirt to comply. She lowered her white cotton panties until they hovered at the top of her white cotton knee socks.
Schoolgirl fantasy spanking. She knew it was cliché, but she still loved it. She devoured any book she could find about naughty school girls and the stern teachers who taught them many different lessons. And when she had saved up her money to spend an evening at Fetish Fantasy that is what she selected.
Even within the schoolgirl fantasy there were a wide range of options: slutty schoolgirl seduces shy teacher, schoolgirl goes to the principal’s office, shy schoolgirl learns tough lessons.
And that is how Lacy Andrews found herself standing in the middle of a school room staring at the wooden floor with her panties down, her socks pulled up, and a plaid skirt that barely covered the cheeks of her ass.
Dirk had emailed her earlier in the week. “I know about the naughty thoughts you have been having. Write them in your journal and bring it with you on Saturday.”
Oh lord. She could not possibly write those things down and she most certainly could not show them to a stranger.
But isn’t this what you’ve scrimped and saved and dreamed about that little voice in her head told her. And when Dirk stood before her in his stern schoolmaster pose and held out his hand, she placed a notebook with her naughty thoughts written for all the world to see, in it. Or at least for Dirk to see, which was embarrassing enough.
He pointed to a tall stool in front of the blackboard and said “sit.” She complied, her bare bottom against the cool smoothness of the wooden seat. It was a bit challenging with her panties tethering her legs together, but she managed. Dirk did not watch her ascend the stool and she was relieved since she had been none too graceful about it. Instead of watching her, he flipped through the pages of her journal. Her stomach did a few flip flops as he turned back and re-read a passage.
“Your handwriting leaves much to be desired, Miss Andrews.”
“I-I am sorry, sir.”
“You will have to read this passage to me since I cannot make out your chicken scratch.” He handed the book to her and pointed at the top of a page. “Begin here.”
Lacy’s eyes scanned down the page. Oh no. Not this part.
“Miss Andrews, I am waiting,” he said. His voice made her toes curl and her stomach knot.
Lacy licked her dry lips again, cleared her throat and began. “I have had naughty thoughts about Kevin. He works in the cubicle next to mine. He is so sexy. Sometimes I pretend that I am working but I just sit in my cubicle and listen to his voice while he is making phone calls.
My favorite fantasy is that he finds me working late at my desk and…” Here Lacy faltered, her face the deep crimson of shame.
“I did not tell you to stop,” Dirk said.
“I am embarrassed.”
“As well you should be. Having such thoughts about your coworker. I had no idea how very naughty you were Miss Andrews, but I can see that I have gotten here just in time to prevent you from living a life of shameful, sexual degradation. Do you want to be a woman who is guided by her unbridled libido?”
“N-no?”
Crack. A cedar rod landed on the teacher’s desk and the impact echoed around the room. “Is that a question or a statement, Miss Andrews?”
“A statement. Sir.” Lacy was breathless and to her shame, a trickle of moisture escaped the lips of her sex and puddled on the hard seat of the stool. She moved her leg in an attempt to cover it, but Dirk was too fast for her.
“Did I say you could move your legs?”
“No.”
“What are you hiding from me, Miss Andrews?” Dirk stood in front of her. “Lift your skirt, young lady.”
Lacy’s gaze snapped to his face. His dark eyes were molten with passion. Lacy’s fingers trembled as she grasped the hem of her skirt and raised it. She wished it was long enough to cover her face.
She wanted to look away, but couldn’t. There it was, right there between her thighs, the evidence of her naughtiness.
“It would appear, Miss Andrews, that you are excited by reading your naughty thoughts, is that true?”
“Yes.” She wasn’t sure if it was the contents of her journal or the tone of his voice, but her nipples puckered and pushed against the bra and white cotton blouse she wore. Lacy clenched the muscles of her sex together in an effort to stem the tide of moisture. 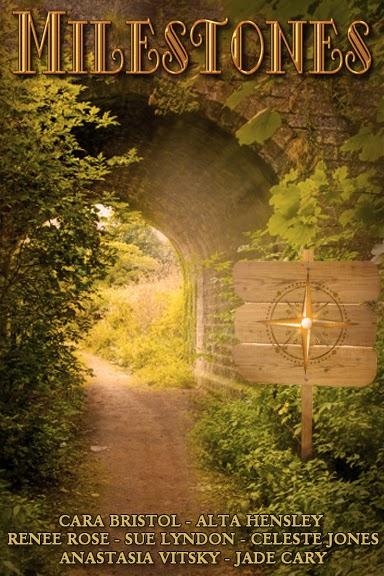 “I believe that we will need to alter our lesson plan, Miss Andrews, in order to account for your atrocious handwriting and unbridled libido. You are clearly a young lady who cannot control her base urges, is that true Miss Andrews?”
“Yes, sir.” Her voice came out as a whispery breath. She glanced down at the buttons of her blouse that strained against the pressure of her swollen and throbbing breasts.
Dirk held his hand out to her. When she placed her slightly trembling fingers in his, she felt a zing of desire flutter through her body and straight to her tingling sex. She bit her lip and alighted from the stool as gracefully as she could given her naked ass, steaming pussy, and lowered panties.
He guided her to the blackboard that spanned the front of the room and placed a piece of chalk in her hand. “You shall write ‘I am a naughty girl with terrible handwriting and impure thoughts’ on this board twenty times. And you shall start here,” Dirk said pointing to a spot at the very top of the writing surface.
“Bu—“ Lacy began to protest that she could not reach that high, but the look on Dirk’s face told her that protesting was futile.
She took the chalk in her hand, stretched up on her tip toes and began to write.
The shortness of her skirt made it impossible for her to comply with Dirk’s instructions without exposing her entire bottom to his view. Her panties had fallen down around her ankles and she hoped Dirk would not order her to raise them to her knees since it would be difficult to keep them there while she stretched to reach the top of the blackboard. She began to write. The squeak of the chalk against the blackboard and her labored breathing were the only sounds in the room.