Please welcome Robin Smith (sister of Maren Smith). She's here today to share from her book Love Potion 9.1 which is part of the With Hearts Aflame Box set.

Blurb:
Harper Hicks is a bonafide witch, who has brewed up a bonafide love potion for sale to the normal and not so normal customers at her bookstore. After all, who doesn’t want a little extra heat around Valentine’s Day? And this one is guaranteed to make fantasies come true. What could possibly go wrong? 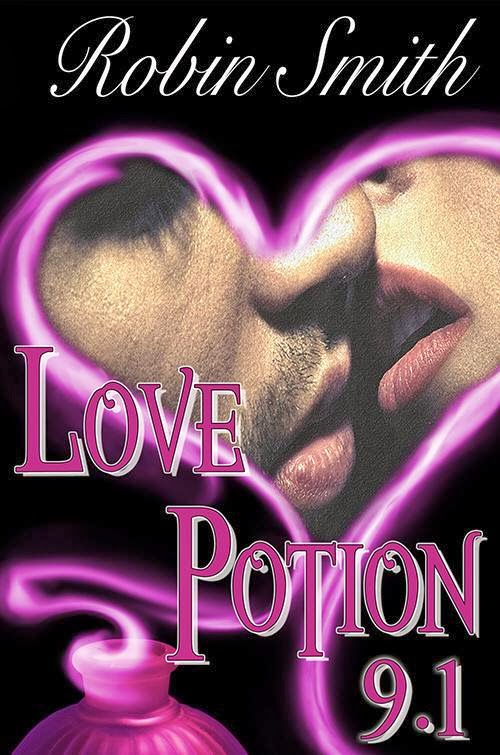 EXCERPT:
Harper was a witch, the last twig on the Hedgewick family tree, where being a witch used to go without saying, but in this enlightened modern age, Harper was the only one left of her generation who could get a broom off the ground. Yes, the Hedgewicks had always been witches, but the Hickeses? Schoolteachers and nurses and fast food fry dippers. Practically normals. Half her cousins didn’t even believe in magic.
Harper parked and made a dash for the door through light eddies of snow, holding a haphazard mess of papers over her head as a kind of umbrella. The bell over the door rang out as she came in from the cold and her voice rang out with it, cheerfully unrepentant: “I’m back!”
“Oh, were you gone?” drawled Damien, not looking up from his book. “I hadn’t noticed.”
Born a scant six months before The Omen would give his parents the world’s worst case of baby name buyer’s remorse, Damien Kaine was Harper’s partner and it was thanks to his business sense and accounting skills that the store was turning a profit even here, in the No Man’s Land of 1800 Plaza. More than that, he was her best friend, something she thought she’d outgrown along with high school until she had it again with him. And if they did some hanging out now and then (okay, every Friday), so what? Friends could hang out and go to movies and occasionally even feel their heart leap whenever another friend smiled that certain way or got that devilish glint in his friendly dark eyes or even pulled a friend close at midnight to start the new year off right with a kiss.
Just friends. It was better this way. Well, maybe not better, but less complicated. Even if it wasn’t for the whole business angle or the witch/normal dynamic or the usual risk of ruining a perfect friendship by trying (and failing) to fall in love too, there was the rest of it. The rest of her. The secret submissive Harper. What would happen when they got to the bedroom and she had to expose…that part of herself? Oh, he might give it a go, but he’d laugh first and treat the whole thing like a joke. Or worse, think ‘submissive’ meant ‘slave’. The last guy Harper had dated kept trying to get her to say she was a filthy little slut who needed a spanking and when she finally complained, had said, “Look, it’s your sick game. I’m just trying to play along!”
She shouldn’t have to be a filthy little anything to get a spanking. A man could be loving and still be dominant, couldn’t he? And a woman could be strong and independent and still submit, just like she could be sexy without being a slut. And in a perfect world, that woman could just walk up to that man and say, “I really like you and I want to try to be with you and also, please spank me,” without fear. But this was not a perfect world and that was her best friend sitting there behind the counter, not to mention her business partner. That man was a man she would have to face for days and weeks and months and maybe even years after she said the word ‘spanking’ and saw his surprise/disbelief/disgust/amusement.
And why was she torturing herself like this? Why, when it was such a great day?

Buy Love Potion 9.1 on Amazon
Buy the With Hearts Aflame Box Set on Amazon
We'll be discussing all the stories in this set on Friday for Spanking Stories Book Club so be sure to come back then for more!
at February 25, 2014