In honor of President's Day I am saluting Dinah McLeod and her new book, Sir, Yes Sir. 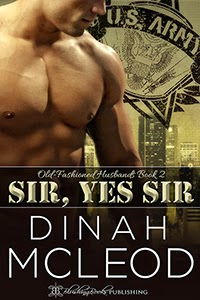 Blurb: Shelby Davies has always tried to be a good wife. She's done everything possible to support her husband in his career and raise their son, often single handedly. Her whole world is tilted on it's head when her husband, Dean, retires from the military and they have to start all over as civilians; a world unfamiliar to them both. What's worse is that they're both keeping secrets that could change everything.

I found this book thought provoking and a bit gut wrenching. It tells the story of Shelby, Dean and their teenaged son as they adjust to Dean's unexpected retirement from the Army. As the series title states, Dean is an old-fashioned husband used to giving orders and having them obeyed without question.

However, civilian life is not as tidy and controlled as the Army and Dean must  maneuver (clever
Army reference !) a wide range of changes---his wife has a job, his son not only has a girlfriend, but the two of them attend anti-war rallies and his new co-workers are hardly spit and polish.

The beginning of this story had me gritting my teeth. I'm pretty sure I would have told Dean a few things  that might not have gone over so well. Shelby, however, has known Dean longer than I have, and she loves him very much, so she had more compassion for his situation--- a strong, self-sufficient man without a job and  facing physical challenges --- than I did. I admired her for that . She was in a tough spot, trying to hold her family together while giving Dean the space he needed to sort through his issues.

I'm not sure I'd call this a romance as much as I would call it a story of mature, lifelong love. The sort that lasts through tough times and heartache rather than flowers and rainbows and riding off into the sunset for a life without stress. This is a realistic look at the types of struggles I'm sure many people deal with in their marriages. The resiliency and love of this family was heart warming. Give it a try!