Naming Those Rakish Pirates and Their Vessels : Normandie Alleman Is Here With A #Giveaway

YoHoHo---Normandie Alleman is here to talk about Pirates and her new book, Rescued by The Buccaneer. And there's a giveaway! Wooohooo.

The other day we were talking about the name of the pirate ship in my book, and I have to tell you – there is a pirate ship name generator on the internet (http://www.seventhsanctum.com/generate.php?Genname=pirateshipnamer ) that is a blast to play with. And while I didn’t use a name directly from it, I did get a lot of awesome ideas from their suggestions. There are three ships in Rescued by the Buccaneer – the Neptune’s Damnation, the Adelaide, and the Ocean’s Knave. In the second book in the Pirates of the Jolie Rouge trilogy there will be three more ships. Today when I was playing with the generator I came up with three more favorite names – Poseidon’s Whore, the Shame of the North, and the Dirty Barnacle!

There is also a generator for pirate names, and it’s rather entertaining.
http://gangstaname.com/names/pirate/generate  Check it out and see what your pirate name would be. Mine was “Fish Breath Abigail”. Sexy, right? So you can see why I name my own characters. I’d like to offer a contest today so if you’ll leave a comment and tell me either 1.) a favorite pirate ship name or 2.) your pirate name from one of the generators, next week I will choose one lucky commenter to win an e-book from my backlist.

Blurb for Rescued by the Buccaneer, the first in the Pirates of the Jolie Rouge Trilogy:
When Frederica Beauchamp boards a ship for the Americas, she dreams of a life filled with adventure, but she gets more than she bargained for when her passenger ship is attacked by pirates.  The heartless men kidnap her and force her to serve their captain—a fate that might be worse than death, since though he does not have his way with her, the captain delights in baring her, shaming her, and thrashing her bare bottom as punishment for every imagined disobedience. 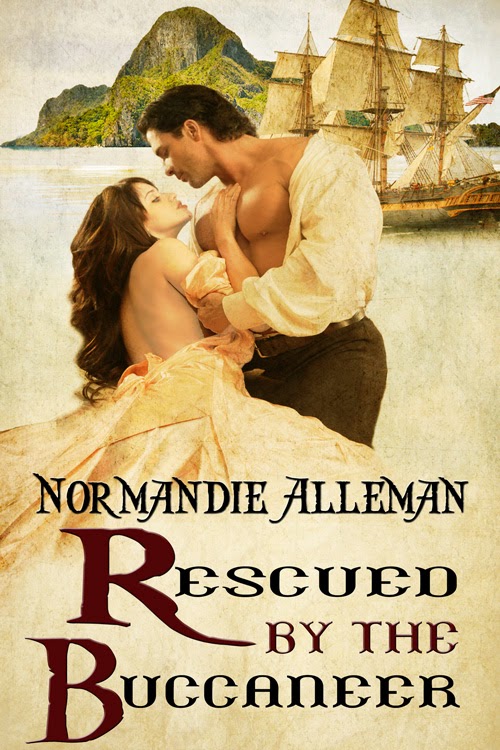 After the pirates bring aboard an injured man found floating in the sea, Frederica tends to his wounds and learns that he is Gaston Galette, a survivor of a shipwrecked vessel. Gaston seeks her help to overthrow the vile captain, but when their plan goes awry he is forced to use all of his wiles to save them. As the naïve girl and the seasoned sailor navigate one perilous situation after another, he informs Frederica that the only way they can survive is if he is in command, and that if she thinks things can be otherwise, she will be taken over his knee for a bare bottom spanking.

As he watches the proud, willful Frederica bow to his authority, however, Gaston worries that her growing hold on his heart will be his downfall. He knows he cannot take a woman with him when he returns to his ship and crew, but when Frederica accepts his lustful dominance completely, submitting to him with grace and beauty no other woman could match, Gaston realizes that he may never be able to let her go.

Reluctantly, she tiptoed across the small space until she was just out of reach.
“Lift up your skirts.”
Her heart skipped a beat. “Excuse me, sir?”
“Are ye hard of hearing?”
“No,” she squeaked.
“Then lift up your bloody skirts!” he bellowed.
Fighting back tears, she gathered her skirt and petticoats in her arms and lifted them up.
“‘At’s more like it,” he said and reached for her.
She instinctively took a step backwards, but he was too fast for her, grabbing her by the waist and hoisting her over his lap. Within seconds she was slung over his knee.
“Eeeh! What are you doing? Let me go!” She tried to wiggle free, but she was restrained by his big burly arms.
“Kindly shut yer yap, or ye’ll be getting the worst of it.”
Humiliation coursed through her, and the cold air on her bottom reminded her that her bare ass was exposed to this man she barely knew. A rough, calloused hand scraped across the tender flesh of her ass, followed by a hard slap to her rear. The pain almost made her forget the humiliation. Almost.
She whimpered.
“I’ll have ye take yer punishment quietly or ye will earn double the strokes.”
Another smack, this one harder, landed on her cheeks.
She groaned.
“What did I tell ye?” Thwack! The next blow landed even harder, as if to drive his point home. This time she bit down a knuckle, hoping to muffle her cries.
“Better. This ass is getting mighty red,” he chuckled.
With each smack, she fought to hold back her cries. But her posterior stung, and water welled in her eyes.
“You’re doing better. Lie there and take your punishment like a good girl,” he crooned, swatting her ass again. And again.
Just when she thought she couldn’t take it anymore, he stopped.
Though he loosened his grip on her, she was too wrung out to move.
“I’m the one who’s in charge here, girl.”
“You are, sir,” she mumbled, dazed.
“That’s right. I own you, pretty little slave.”
“Yes, sir.” It was as if her head were filled with clouds, and she was so relieved that he’d stopped swatting her she just wanted to stay there, in the strangely happy space where the spanking had taken place.
When he slid his hand up her inner thigh between her legs, her brain urged her to protest. A slight, “Umm” was all she could manage.
“What was that?” he asked in a taunting voice.
“Nothing, sir.” Frederica felt as though she were in an altered state. Deep inside, something told her she should stop him, but at the same time, she was curious about what he would do to her next.

You can pick up your copy of Rescued by the Buccaneer today!

A former psychologist, Normandie has always been fascinated by human behavior. She loves writing quirky characters that are all too human. Fiber arts, baking, and Pinterest are a few of her favorite pastimes. She lives on a farm with a passel of kids, an adorable husband, and a pet pig who’s crazy for Red Bull.
Follow Normandie here:
Twitter at @NormandieA  https://twitter.com/NormandieA
Pinterest at http://pinterest.com/NormandieA
Facebook: http://www.facebook.com/pages/Normandie-Alleman
Goodreads: https://www.goodreads.com/author/show/6893037.Normandie_Alleman
Amazon Author Page: http://www.amazon.com/Normandie-Alleman/e/B00BNUDVFW
Her website: www.normandiealleman.com
Remember to leave a comment about your favorite pirate name or ship name for a chance to win an e-book. Ahoy me hearties!