A big round of applause and a giant thank you to Cara Bristol for hosting this week. Guest hosts are wonderful because 1. they make my job easier and 2. they provide a wider range of stories than if I just wrote about what I read.

If you would like to host some time, please send me an email at celestejones215@rocketmail.com

Take it away Cara Bristol:

I’d seen Rollin Hand’s name on social media sites and had gotten to know him there, but it wasn’t until Pendragon’s Lash, that I had an opportunity to read his work. I was pleased to discover Pendragon’s Lash is well-written, well-plotted and offers something different from the typical spanking romance trope. In his novel, four agents of the Star Federation seek to establish diplomatic relations with the less “advanced” planet Pendragon, where the men rule over the women. The female agents quickly run afoul of the rules and suffer the lash. What is different about Rollin Hand’s story is that it has four main characters and the novel switches between them, yet it remains one cohesive story (as opposed to a series of short stories).

Before we get to the questions, here’s the official blurb: 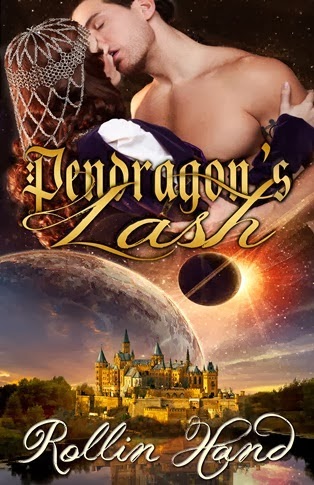 Over the course of seven hundred years of isolation since its colonization during the great diaspora at the end of the twenty-first century, civilization on the planet Pendragon has deteriorated to the point that society now resembles that of medieval Europe. The nations have long fought for power, and when the benevolent Star Federation learns of a threat to a royal marriage that could bring about a lasting peace between the kingdoms, four operatives are sent to ensure that the wedding takes place as planned.

Striving to blend in with the local population, the agents soon learn that this world is nothing like their home planets. Danger lurks at every turn, but there is something even more unusual… On Pendragon, it is a man’s right and duty to ensure that the women under his authority are well-behaved. As the mission progresses, each member of the team faces unique challenges.

Elana, a botanist reporting on medicinal plant life, resists her forced dependence on a native who thinks part of his job entails spanking her when she disobeys his orders, yet at the same time she finds herself drawn to this firm-handed barbarian.

Jessica, a bodyguard disguised as a maid of the bride-to-be, finds her hands full keeping the bratty princess safe. But when Jessica falls in love with a native prince, can she admit to him—and to herself—that she can’t wait to be taken over his knee?

Trevor becomes a tutor for the daughters of a noble, but his assistant Iris grabs his attention in a way no woman ever has before. When he must chastise her—for he must do as the locals do—he cannot help but enjoy it, but will Trevor truly go native?

Julia enters the Benefice Sisterhood with orders to spy on the Universal Church of Atonement. She soon finds it painfully clear, however, that life with the Sisterhood will mean harsh discipline. Can she stay strong and carry out her assignment?

Success is uncertain, but no matter what happens, this mission will change the history of Pendragon and the lives of these agents forever.

Questions:
What did you think of the format of having the story shift between four main characters?

Which character do you think had the hardest assignment:  Elena the Botanist, Jessica the babysitter of the spoiled bride, male agent Trevor, Julia the novice (nun)?  Which character’s story resonated the most with you?

Usually in spanking romances, the heroine disobeys some edict of the hero and is spanked for it. In most instances in this book the undercover secret agent heroine was spanked as a result of trying to do her job. What did you think about those scenarios as “spankable offenses?”

In Pendragon’s Lash, public punishment is the norm. Do you find that idea sexy or is it too over-the-top?

How adventurous are you? Would you ever leave home and go to another planet?