For a writer, the critique partner relationship is almost like a sacred trust---you share your writing with them and trust them to give you feedback that is honest and helpful without bruising the fragile writer’s ego. April and I have only been working together for a couple months, so she didn’t have any input on Twenty One Days to a Better Attitude or Legal Briefs, but she had a major influence on Underwear Probation. If you’ve read Underwear Probation, you’ll notice that the heat level is much higher than in my prior works. You can thank April for that.
I’ve been bragging to April about the wonderful people who read my blog, so let’s give her a warm spanko welcome! 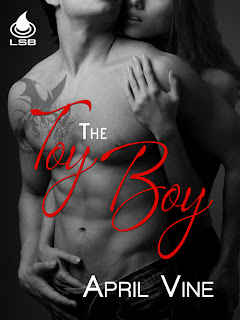 Lusting over her neighbor’s too-young-to-touch hot nephew while he mowed the lawn in the hot sun was one thing and bad for her sparkling reputation. Finding him in the same sex shop where she is purchasing artificial gratification to ease the sexual bother he evoked in the first place is quite another and forces thirty-four-year-old stickler for rules Cait Daniels to fly red-faced through the doors of Curious Coition without her paid for merchandize in hand.
Since he is staying with his aunt for a few days, twenty-four-year-old Declan Meyer wants to do the neighborly thing and return the orphaned sex toy to its rightful owner. Only in this case the rightful owner is the same woman he wants in his bed, his heart, and his life. He is not above holding the pleasure tool over her head and threatening her good standing in an attempt to show her the real thing with him, never mind his age.
Excerpt:
“Will that be all for you?” the cashier asked, her orange glazed smile wider than before. “Yes, thank you.” Cait dared not look her in the eye. She hadn’t come that far yet; instead she dallied with her purse while the cashier counted the cash and registered the sale. She wished she’d just give her the mock cock and forfeit the whole idea of popping it into a Curious Coition designed bag. She really just wanted to get the hell out of the place already, preferably armed with the selected merchandize secured in her handbag. A long bath later and maybe even candles, and then it’ll be just her and the dildo, eradicating any unhealthy thoughts she harbored about him that she couldn’t have.
“It’s one of our bestsellers. I’m sure you’ll enjoy it.”
Could she work any slower?
“It’s a lovely day outside, isn’t it?” she continued. “I should tell you we have a no return policy, unfortunately, so if—”
“That’s fine. I…” Whatever else Cait meant to say died on her lips as the velvet curtains hanging from a rail behind the cashier parted. Her overworked heart ground to a dead-halt and manic nerves singed her skin. Her brain spun out of control, drowning her in disbelief. She resisted the urge to rub her eyes in case her vision felt prone to play cheap tricks on her now of all times. But no, he, the totally hot and completely off limits reason she found herself parading in a sex shop in broad daylight, was real, gorgeous, and instantly he recognized her.
His sexy thick-lashed gaze skimmed over the package dangling in midair from the cashier’s hand en route to the bag and then landed back to her. Scorching hot blood rose into her cheeks. He folded his arms and then rubbed the edge of his jaw with one of his hands as his sensuous lips curved into a killer smile. Sparkling, straight white teeth mocked her. She couldn’t look away, not when his overpowering height demanded she see nothing but him.
Amusement lined the gray of his irises as he relaxed against a tall cabinet next to him, enjoying her discomfort, and making no secret of it. This couldn’t be happening to her. Embarrassment of the kind she never experienced before dictated her next move. Flee, leaving behind her purchase in the cashier’s hands. Without a backward glance, she scurried out of the shop. She refused to question her juvenile antics as she dove into her car and started the ignition. The only sound louder than her resuscitated heart thudding inside her chest was the wheels of her car screeching in protest as she fled what she now called the crime scene.
Really? Of all the people in the world she could have met at a sex shop, did it have to be him? The core reason for her cranky mood, which sprouted from a lack of good old-fashioned fucking, revived by the mere sight of him. Eyeballing him from her window as he mowed the lawn was one thing, running into him at a sex shop and being caught red-handed soliciting artificial sexual favors quite another.
But when she’d woken up that morning from a night of dreaming about him, her wet and unsatisfied pussy dictated all her impulsive actions. She couldn’t bear another night feeling so sexually deprived. She wanted instant gratification, so got into her car, drove into town, and found a sex shop. Now she wished she had practiced a little more patience, bought the darn thing online, and waited however long it was for them to deliver it. Patience though was never the quality she held in high merit. Besides, if she wanted something done, she always did it herself.
The way things were going her way, her online purchased dildo would probably arrive at her doorstep in a van with a cock painted on the side, sirens wailing, and a police escort, and everyone in the neighborhood would know. She groaned. Dammit, she knew his aunt. And what was he doing in a shop like that anyway?
She ducked her head as she pulled into her driveway, hoping to never set eyes on either the aunt or the nephew ever again. Thoughts of relocating flitted through her brain. She slipped into her house, locked the door, drew the curtains, and paced the floor as she bit her nails. What a mess. How had everything gone so hopelessly wrong so utterly quickly?
She still remembered meeting him six years ago when he concluded his greeting by calling her Ms. Daniels and matching it with a cocky smile. She had smiled back at him then, amused by his misguided youth, and the seed of underdeveloped arrogance hovering beneath the surface. Now … now six years later at the age of twenty-four, he came in a different package altogether.

Don't forget--leave a comment with your email address in it for a chance to win a copy of The Toy Boy.
Thank you April! I hope you'll all check out her blog and her books!