A Second Chance At Love: Destiny Takes A Hand by Leigh Smith

Today's book is Destiny Takes A Hand by Leigh Smith

This book is also available through Kindle Unlimited and you know I'm a fan of that program.

Here's why Leigh thinks this book deserves a Second Chance At Love:


I don’t know about you but I don’t always fall in love with the characters in my stories.  I love Samantha Freemont, she is so independent and headstrong, she grabs onto life with both hands and doesn’t let go.  Not necessarily always a good thing, she has the courage of her convictions and I think we could use more of that in today’s world.  The book received some great reviews and feedback and I don’t think the timing of it’s release and the initial promotion did it justice.  I could be wrong.

Christopher Matthew Chambers, the eldest son of a wealthy family, shows little interest in the family business, preferring to do his own thing much to the disappointment of his father.  When a relative of his mother dies and the family inherits 10,000 acres of prime real estate known as Sutter’s Ridge in the , Christopher is asked to attend to the funeral arrangements and to clear up any remaining legalities. 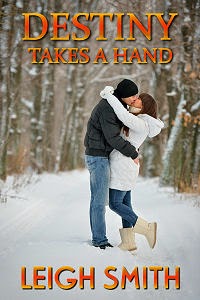 During his visit, the weather takes a turn for the worse and he finds himself in the middle of a blizzard.  While driving back down the mountain, he swerves to avoid a stray elk and ends up in a ditch.  With no help in sight after a couple of hours, he sets off in search of somewhere to hole up until the storm passes.  Fortunately, he stumbles across the house of Samantha Freemont, a sexy but feisty young woman with whom he feels an instant attraction.  A passionate romance quickly blossoms but Sam’s fiery temper and stubbornness make for some turbulent times.

The sex between them is great but Samantha is headstrong and tends not to listen to advice, even when it’s in her own best interest.  When she goes too far, Chris has no hesitation to put her across his knee for a well-deserved spanking, but he soon discovers that rather than being chastened, she actually enjoys it.

With a heart filled with regret due to Sam’s blatant disregard for his feelings and wishes, he decides the relationship cannot continue.  For a while, it seems a happily ever after may not be in the cards, but then Destiny Takes a Hand.