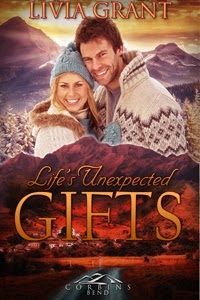 Violence has been part of Hallie Boudreaux’s life for too long. Deciding all men are barbaric abusers, she’s once again on the run away from danger. Desperate to feel safe, if even for a few days, Hallie remembers the only time she had felt truly happy in the last seven years were the summers spent at her Aunt Jenna and Uncle Calbert’s. Taking a chance her aunt might take her in, Hallie points her dilapidated car towards Corbin’s Bend, praying she makes it there before her clunker takes its last gasp.

Troy Jackson can’t wait to surprise his sister on her 30th birthday. He’s recently moved back to Colorado to be closer to his only relative, Traci, a psychologist living in Corbin’s Bend. The surprise is on Troy when his normally conscientious sister runs amok on her big birthday proving that even intelligent, independent women still need the stern guidance of the men in their lives. Having grown up with loving parents who practiced the domestic discipline way of life, both Traci and Troy subscribe to the founding principles of the Corbin’s Bend community wholeheartedly.

Hallie’s family is thrilled to have her in Corbin’s Bend, but can Hallie come to terms with living in a community based on its endorsement of spanking, a practice Hallie sees as abuse. Can Traci’s counseling help her overcome her fear in order to accept her new life in Corbin’s Bend, or is it Traci’s brother who ultimately has the power to show Hallie that not all men are abusers?

11.     The story opens with a brother spanking his adult sister for a serious safety violation—she brought home a man she’d just met and drove home while under the influence of alcohol. Since the father had passed, he took it upon himself to serve as HoH and spank her because their father was no longer alive to do it. Do you think Troy was justified? Did he overstep his bounds?

2.    Thinking of domestic discipline as a real life lifestyle, do you think it should be limited to husbands/wives and domestic partners or is it okay for another family member to step in and correct another’s behavior? Why or why not?

33.    I think we’re all in agreement here that abuse (beating) is different from spanking/domestic discipline. But, in real life, do you think that someone who had been a victim of domestic violence could come to embrace domestic discipline? Why or why not?

44.     Troy often expresses uncertainty and questions his own actions. And he goes easy on Hallie (discipline wise) because he knows of her abusive past. Does he seem less dominant than if he’d laid down the law, or does it make him more likable as human being?

Excellent questions, as always, Cara. Can't wait to see what everyone has to say.