Second Chance At Love: Master of Two by Patricia Green and Karin Ito 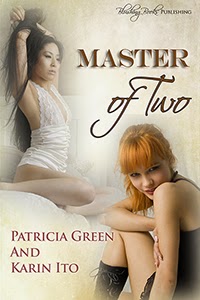 Discover the world of Kevin Watson and his two lovely partners, Renee McNamara and Amiko Saito. In this story, Kevin and his women are sundered by an evil Countess, who claims to be in love with Amiko, so kidnaps her and drags her to the continent as her slave. Kevin can't countenance the loss of one of the women he loves and he and Renee embark on a mission to retrieve their partner and bring her back home to Los Angeles.

There are tribulations and dominance challenges along the way, often complicated by their rough, hired private detective, Ross Adler. Kevin's sadism peaks and valleys along with his moods. Renee is brokenhearted that her friend and lover is missing, but she is devoted to Kevin and his harsh way of showing his love. Amiko's experience is brutal and a trial to the lovely woman's fortitude.

Can Kevin and Renee vanquish the evil Countess? Will they get Amiko back, and if so, in what condition?

Kevin’s exertions shone on his strongly hewn features as a light sheen of moisture and a burning heat from his body, even in the cool water, but it was the focus in his eyes that compelled Renee to greater heights. His gray eyes were gun barrel dark, moving from Renee to Amiko, then back again. He was drinking in the moment and Renee reveled in it.

The phone in the house began to ring and no one was inside to answer it—the maid was off for the night. Kevin mumbled, “Let it go.” None of the three skipped a beat, ignoring the insistent ringing until it stopped a minute later.

Amiko begged for release; Kevin grunted a non-answer, and the beautiful Asian woman groaned, her need bringing her too close to breaking the house rules.

Kevin growled and arched his back, filling Renee to capacity and beyond, then ground out a single word, “Now.”

Both women mewled and sobbed their release as a chorus of animalistic exhalations.

“Damn.” Kevin pulled out of Renee unhappily, his annoyance written clearly in the slant of his dark brows toward the middle of his broad forehead.

The phone stopped ringing as he levered himself from the pool and dried his hands, the rest of him dripping on the tiny, smooth rocks of the deck. As Kevin toweled his face and dark hair, the phone clonked to alert him to a voicemail message. He picked up the phone and touched its screen, then raised it to his ear.

Renee, still floating on a Sargasso sea of satisfaction, watched him through half-lidded eyes. His face darkened as she watched, the tiny lights climbing the palm trees in their yard illuminating him only dimly. The pool light added a blue tinge to his otherwise tanned appearance. She heard his low curse, and watched him stab the phone, closing its connection.

In her personal life, Patricia is married and the mother of twins. When she’s not being the angel of domestic harmony and a semi-crazed creator of fictional friends, she loves to read, crochet, knit and watch hockey and baseball.

You can reach Patricia Green in the following ways:

Karin Ito is a very private person, just starting out on her writing journey. Her life revolves around her family of five and her duties within her household. She is an avid golfer and enjoys cooking and reading. She's been writing for about two years.

You can reach Karin at:

Karin's stories are available on Literotica and through Patricia Green Books.