Now Available: Lolly and the Professor

Woohooo! Lolly and the Professor is available a day earlier than expected. Just in time to keep you warm on a cold Sunday.

Available only on Amazon, it can be purchased for 99 cents or borrowed if you are a Kindle Unlimited or Amazon Prime member.


Blurb: Professor Douglas Hollister enjoys his reputation as the toughest teacher at his law school. His well-ordered and controlled life is turned upside down when Miss Caroline "Lolly" Anderson shows up on the first day of class. 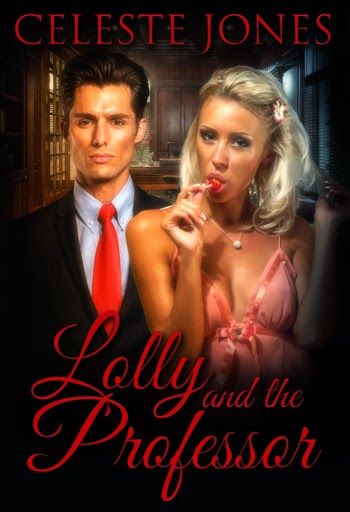 Lolly has no interest in becoming a lawyer, but her grandfather's will stipulates she must complete one quarter of law school in order to inherit his vast estate. Well-versed in flirting her way through life, Lolly is sure she'll be able get deliciously geeky Professor Hollister to do her bidding.
Will The Professor be able to resist her luscious Lolly-pop ways—or will he lose his briefs?


Note: This is a short story that involves a young woman who does naughty things with suckers and a strict professor who likes to lay down the law with a firm stroke.

Douglas Hollister stood at the podium mentally preparing for his first lecture to a group of new law students. He’d been one of them just a few short years ago, ten to be exact. He thought back to that day with a bit of embarrassment.
He hated to admit it, he thought sheepishly of the young man he’d been, but he was firmly in the hubris category when he’d started law school a decade earlier. He had the combination of natural self-confidence, good grades and a killer LSAT score to give him the boost of bravado he’d needed to actually raise his hand the first day of class and volunteer an answer. Volunteer. In law school. On the first day. Hadn’t he seen any of those law school movies where the professor verbally filleted the fresh-faced and cocky law student who had the balls to volunteer an answer?
Apparently not.  Or if so, he’d had just enough chutzpah to go for it anyway.
He deserved the verbal beat down he got that day. He'd learned a valuable lesson, despite the big chunk of pride it had cost him.
After that he’d kept his mouth closed and his books open. Law review, moot court and a prestigious clerkship with a judge who was a likely Supreme Court nominee followed. After graduation he worked at a major firm in the city until joining the faculty of his alma mater three years before.
Teaching suited him more than he expected. He liked molding eager young minds and the life of a faculty member was much more cerebral than being on the partner track. Schmoozing for clients held no appeal.
Douglas never begged for anything.
He checked his watch and the classroom clock. Time to begin.
He opened a leather binder in which he’d already written the names of his students—with pencil—and began calling the roll.
“Anderson, Caroline.” No answer.
He looked up. “Miss Anderson?” His eyes swept across the group before him. Most of the students glanced around the lecture hall for the missing Miss Anderson. A couple met his gaze. The rest kept their eyes glued to their books.
He gave the room one last sweep and returned to his task.
“Bell, Cha—"
The door swung open and a woman wearing a yellow sundress, high heeled peep-toe shoes, and carrying a giant tote bag in one hand and a monstrous travel mug with a coffee shop logo in the other, entered and made her way down the sloped floor of the lecture hall.
Students turned to gawk. A couple snickered. A few looked horrified. Everyone knew you weren't supposed to be late to class, especially not on the first day.
And nearly everyone glanced at Douglas to gauge his reaction.
Amidst a sea of clutter and clatter, and apparently oblivious to the disruption she caused, the late comer made her way to the front row and arranged her classroom necessities—coffee, lap top, cell phone, and daisy-shaped make up bag̶—on the table in front of her. Once situated, she took a long pull from her travel mug, looked up at Douglas expectantly and smiled.
“I’m ready now.”
Most of the students did an admirable job of covering their laughter, but a couple guffawed with enough vim to cause her to turn and look behind her.
“Oh—am I late?”
Douglas felt the corners of his mouth twitch, but he bit his inner cheek. The first moments would set the standard for the entire quarter. He squared his shoulders and took charge of the room.
“Yes, you are. Anyone arriving after I begin taking attendance is late and in this class, late is the same as absent.”
Her lush red lips gaped and her fine brows furrowed in confusion.
“So…I’m absent?”
“That's correct.”
"But, I’m here.”
“Yes you are, but you’re late. So that means you’re absent.”
A young man in the second row whispered, “This is starting to sound like ‘Who’s On First’”. Those in hearing range giggled.
Douglas could feel the class, and his authority, slip away. “You wouldn’t happen to be Miss Anderson, would you?”
Her eyes, a distracting shade of cornflower blue, lit up. “Yes, but everyone calls me Lolly.”
“Lolly?”
She pulled a Tootsie pop from her cavernous bag, removed the wrapper and placed it against her plump crimson lips. “Lolly. Like in lollipop.”
Douglas watched her work the candy and felt himself getting hard. His budding boner wasn’t helped by the fact that she slanted her eyes to his crotch with a wicked look that told him she knew the affect she had on him.
He gripped the edges of the lectern and reminded himself to stay there until the wood in his pants returned to normal.
“Or lollygagging,” he said, pleased to see the saucy look on her face dissipate.
She pulled the candy from her mouth with a resounding pop and tilted her head at him in a so what are you going to do about it? look.
“There are thirty other students in this class who were able to arrive on time. We have important material to cover today. You and I can discuss your loll—uh, attendance after class.”
She pushed the head of the sucker around the inside of her cheek, causing it to bulge like it was full of…well, you know. She pulled the candy from her mouth, but not without running her tongue around the head…er, top and said “Sure.”
One young man in the third row gasped. “Holy crap.”
Douglas might not have been the only man in the room carrying extra wood